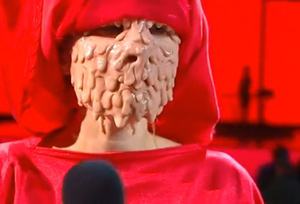 One of the interesting shifts in both the music industry and television is that mainstream TV has actually become a reliable source of great musical moments. Admittedly, some of the best moments on TV in the last year didn’t happen in the United States, so we technically found out about them online. Nonetheless, there were some great music related moments on TV this year, and here are ten of our favorites.

10. James Murphy makes a cameo on ‘The Soup’

Robyn performs an elegant, slowed-down version of her single “Hang With Me” at Blair Waldorf’s birthday party… or something. There’s drama!

Cee-Lo Green stopped by ‘The Colbert Report’ to sing his hit song “Fuck You.” Of course, he had to change the lyrics for TV decency, so he changed the title to… Fox News!

7. Of Montreal visit ‘Yo Gabba Gabba’

Of Montreal had contributed a song to ‘Yo Gabba Gabba’ last year, a catchy little tune about brushing one’s teeth. But this year, the band appeared on the show with a new song titled “Bananas, Rice, Applesauce, Toast!’ And they actually kind of look like the lovable, colorful characters on the show. Jezebel was right, Nick Jr. is now way cooler than MTV.

Of Montreal on Yo Gabba Gabba! from NickPress on Vimeo.

Martha Stewart and Big Boi don’t always run in the same circles, but the Outkast emcee’s appearance on her daytime show was nonetheless highly entertaining. He even gave her a new name: Lady Martha Macaroni.

Fox News’ ‘RedEye’ is a weird show. Its host, Greg Gutfield, loves metal and hardcore, and invites guests like Fucked Up or Torche, the latter of whom received a hilarious endorsement from former Gov. Mike Huckabee. He suggests that if you don’t know Torche, “you’re a racist homophobe.” Strong words.

Kanye West made a lot of, um, interesting TV appearances this year, but his performances on ‘SNL’ were the most badass, by far. Surrounded by dancers before a set draped in white, it seemed less like a Saturday Night Live performance and more of, well, a Kanye West show.

New York post-punk-funk heroes made their first late night TV appearance this year, performing “Cavern” on ‘Late Night With Jimmy Fallon.’ Get down.

2. Justin Timberlake and Jimmy Fallon do the history of rap in 4 minutes

Justin Timberlake teamed up with Jimmy Fallon to recreate the history of hip-hop in the span of a single pop song. Amazing.

Fever Ray’s Karin Andersson gave a speech early in 2010 at an awards show that really can’t be described well enough to do it justice. Watch and be amazed.