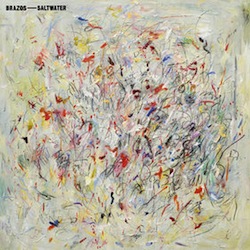 Brazos, the brainchild of Martin Crane, translates to “arms” in Spanish, and likewise bears the name of the longest river in Texas, an iconic body of water that has spawned a lengthy songwriting tradition. Prison farms in the late 19th and early 20th centuries were set up along the river, where prisoners would sing the traditional moaner, “Ain’t No More Cane,” which later came to be covered by Bob Dylan and the Band on The Basement Tapes. And Bruce Springsteen even referenced the river on his 1995 tune “Across the Border.” These reference points pop up in Crane’s music, as do a broad range of influences ranging from transcendental groove music to poet Adrienne Reich and author Herman Melville. On Saltwater, the follow up to Brazos’ 2009 debut album Phosphorescent Blues, Crane offers a defining and beautifully crafted work that lives up to the promise of the group’s debut.

What began as a solo project by Crane in Austin, Texas has now matured into a more fully fleshed-out musical collaboration. Crane has since moved to Brooklyn after touring with White Denim, and his band’s progression on this new release pushes the group closer to par with indie rock luminaries like Grizzly Bear and The National. Where Phosphorescent Blues introduced Crane’s talented storytelling through highlights like “Day Glo,” Saltwater fills in all of the missing elements from that auspicious debut. The new and improved Brazos includes Spencer Zahn on bass and Ian Chang on the drums, and with this lineup, the band has matured into a much more complex musical unit.

The album opens with “Always On,” which immediately seduces the listener with a synth swirl draining into Crane’s restless subconscious with his intricate wordplay on full display: “Well I’m dreaming of a love I’ll never find ‘cause it’s deep within the dark.” The sound immediately recalls similarly pastoral vibes from Andrew Bird, while Crane’s vocals draw a parallel to James Mercer circa The Shins’ first couple of albums. The staccato rhythm of the second track “Charm” is as pleasing as its title suggests. The lyrics are stuffed with seasonal references while it builds up to a beautifully structured, minimalist breeze about an introspective journey.

Saltwater runs with reoccurring themes of solitude and isolation on all nine tracks, the most notable of which is “How The Ranks Was One.” The bouncy percussion with dreamy guitar riffs delivers a satisfying song about a ghost ship and a trip through a dreamlike world. And the stream-of-consciousness songwriting behind “Saltwater” is where Melville’s influence and his personal feelings of solitude float to the surface: “And I question how I could get so close to such a cold heart/and I question if the cold heart was in me from the start.” The evocative serenity, not only in the title track, but the whole album, lend the album a sense of cohesion missing from Brazos’ earlier material.

Of all the qualities that Brazos have strengthened in the past few years, Martin Crane’s voice and songwriting are still the most impressive. It is difficult to follow the lyrics word-for-word at times, but the unexpected result of this is an extra layer of mystery. Each listen reveals something missed the first time around. Crane’s creative feat, fusing several aspects of folk and expansive pop, makes for a psychologically therapeutic, yet tastefully simple album.