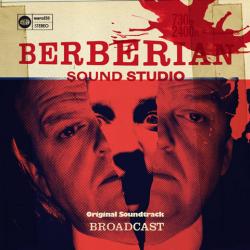 Broadcast effectively ended as a band in January of 2011, following the sad, untimely passing of singer Trish Keenan. Yet the Birmingham-based space-pop duo, having gradually been shaved down from a five-piece band in the ’90s, had a reputation for careful and painstakingly deliberate sonic worksmanship. The end result, while effortless and ethereal, opening up the listener to a psychedelic treasure trove of surrealist treats, took a lot of damn work to make just so. And thus, it should probably come as no surprise that in the time since their last release, the 2009 Focus Group collaboration Investigate Witch Cults of the Radio Age, Broadcast had amassed a large chunk of as-yet unfinished material.

James Cargill, the sole remaining Broadcast member, has stated that a final full-length, featuring the last vocals recorded by Keenan, will surface at a yet-to-be-determined date. But even before that, Cargill has issued another Broadcast release in the form of Berberian Sound Studio, the score to an art-house horror meta-film, in which a sound editor of an Italian giallo film is driven mad by his own work. Keenan and Cargill had worked on the score together, with Cargill putting on the finishing touches after Keenan’s death, and, detached from the more explicit pop arenas the group previously explored, the roles of the group and their well established identity is made all the more amorphous and colored in shades of gray. It’s very much unlike a Broadcast album in any sense of structure or songwriting, but it’s also cut entirely from their singular aesthetic.

As a horror soundtrack, Berberian Sound Studio broadly culls from a long tradition of cult horror — Goblin’s Argento soundtracks, Krzyzstof Komeda’s score for Rosemary’s Baby, John Carpenter’s Halloween. Broadcast, characteristically, treat it with their own brand of playful dream-pop influence, as twinkling interludes like “The Gallops” arrive between screams and bits of dialogue, ghostly chants and the occasional, fully fleshed-out song. And to Broadcast’s credit, a significant portion of the score is genuinely chilling, at times approaching terrifying. The pipe organ dirge of “Treatise” is horror distilled to its most basic elements, while “The Equestrian Vortex” blends eerie melodies with jazzy rhythms, and a heavy Moog throb on “Mark of the Devil” essentially channels dark energy in sonic form.

Only two tracks throughout Berberian expand beyond three minutes (or for that matter two minutes), and each one is part of two complementary halves. “Teresa, Lark of Ascension” is the more characteristically Broadcast of the two, Trish Keenan’s spectral vocals floating in a much more innocent and playful fog, as closing track “Our Darkest Sabbath” is a much more sinister ambient descent. The combination of sounds throughout is remarkable for showing both great versatility and cohesion. The recurrence of themes and textures adhere together well, with no one exercise going on for too long, and no one riff or melody disappearing for too long either. As much homage to classic horror as it is an exciting aspect of Broadcast’s sound only hinted at before, Berberian Sound Studio is not necessarily that long-awaited final album, but something that reveals the depths of its creators’ influence and character. It’s a companion piece for a visual medium, certainly, but as with any of the band’s works, it’s a thrilling, strange and disorienting world unto itself.

Similar Albums:
Broadcast and the Focus Group – Investigate Witch Cults of the Radio Age
The Caretaker – An Empty Bliss Beyond This World
Still Corners – Creatures of an Hour