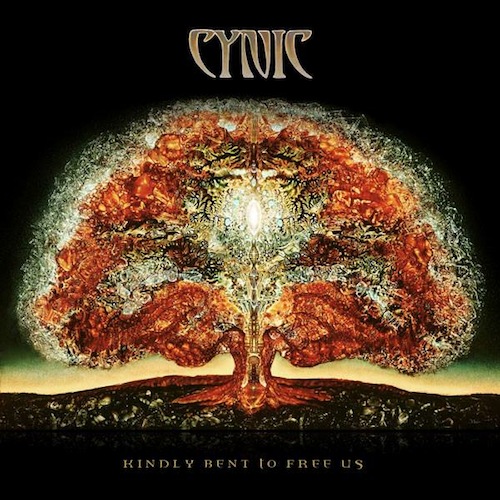 Most fans of metal music would greet the name of the band Cynic with fondness, remembering their 1993 jazz-metal landmark Focus. Perhaps they would not recognize them now. It is always risky business for a musical group to attempt a comeback outside of the place and time where they originally found success; this game is made even riskier by the necessity, assuming they want their music to continue being relevant, of overhauling their sound or expressing something new. My observation here is relatively trite, so I need not belabor examples of successes and failures to illustrate it, but the point is that Cynic’s decided move away from a metal sound on Kindly Bent to Free Us is a major gamble. Traced In Air, their 2008 follow-up to Focus, retained enough elements of the latter to function as a companion piece; with this album, Cynic is doing something more bold – striking out into the cold world of modern rock.

The move from metal to rock is indeed an unforgiving one – just consider the ignominy that the best group to ever manage it endured – but metal artists generally have two initial advantages for the endeavor: experience and technical overqualification. The latter phenomenon is on full display throughout Kindly Bent to Free Us, which offers a series of eight dense and dynamic compositions. The opener, “True Hallucination Speak” serves as an adequate microcosm for the overall sound of the record, retaining the signature interplay between Masvidal’s guitar and Malone’s fretless bass as well as nonstandard song form, but adding a soaring chorus and an ethereal, melodic interlude in the place of death growls. The utter absence of rough vocals will likely be striking, if not a dealbreaker, for the metal contingent, but the listener who is sympathetic to this more smooth and pared-down sound can appreciate the progression that Cynic has managed since Focus. Despite the mitigation of intensity, Cynic’s trio of musicians – Masvidal, Malone, Reinart – are on the top of their technical game here (Malone’s bass on  “Kindly Bent to Free Us” sounds better than anything since Thundercat last year), playing with all the precision of their tech-death days and, frankly, outdoing many contemporary rock artists in that arena. There just aren’t a lot of indie rockers who would write something like “Moon Heart Sun Head” or “Gitanjali.”

However, the musicians of Cynic do not display immunity to the difficulties that generally plague metal artists entering rock either. While the guitar playing and percussion throughout Kindly Bent to Free Us are all consistently outstanding, it becomes obvious early on that Cynic is lacking a charismatic clean vocal to round out their sound. Time after time, Masvidal must go to great lengths to disguise or embellish his somewhat thin voice, utilizing a bevy of vocal effects and backing choral arrangements. In this respect, the vocals here recall the heavily-produced, vocoder-filtered singing that breaks up the metal growls on Focus. But, whereas they offered a periodic change-of-pace for Focus, they stand alone for the entire length of Kindly Bent to Free Us, and not always to Cynic’s benefit. On the particularly strenuous vocal parts of “The Lion’s Roar” and “Infinite Shapes,” this weakness becomes exaggerated and takes some heft out of otherwise tight songs.

Further, Kindly Bent to Free Us suffers due to Cynic’s underwhelming hooks. One might rush to attribute this to their predilection for atypical song form, but that really is not the case. In fact, Cynic features hooks heavily on this record, but they often fail to be either catchy or rousing (e.g. “The Lion’s Roar”) and constitute the most glaring flaw – there are not many others – in Cynic’s songwriting. If it were not for this issue, Kindly Bent to Free Us would probably be in a league with its prominent ancestor Jupiter. As it stands though, Cynic has made a successful, not prodigious, transition to rock here.

Junius – Days of the Fallen Sun