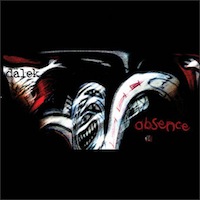 Gangsta rap is no longer the scariest form of hip-hop out there. The smoking gun talk is no longer shocking. Even those who were at the front of the movement (Dre, Ice Cube, Jay-Z) have since moved on. There’s something far more sinister out there, something that could only marginally be called “hip-hop.” His name is Dälek, and his domain isn’t Mobb Deep’s Hell on Eart. He comes from another planet.

On 2002’s Filthy Tongues of Gods and Griots, Dälek pushed rap music into a whole new, bizarre realm of music that sounded almost nothing like the beats and rhymes we’ve come to know. Producer Oktopus combined fat, steel-reinforced beats with noisy, chaotic samples that sounded as if they were pulled straight from one of Sonic Youth’s extended noise jams of yore. And on his latest, Absence, Dälek and Oktopus have returned with an epic, prog-hop masterpiece that would only make sense being released on Mike Patton’s Ipecac label.

When Dälek raps, his verse flows as if he were an apocalyptic sage, foreseeing the fucked-up future we’re heading into, as Oktopus’ scary-as-hell samples lay the foundations for the impending collapse. The first track, “Distorted Prose,” opens only with Dälek’s voice as he introduces himself:

“Broke stride as last of men realized their deep deceit/
this troubling advance of half-assed crews crowd these streets/
never mind of who I am, son, just listen when I speak/
broken paragraphs hold wrath of a hundred million deep”

That’s when all Hell breaks loose. Oktopus starts a mad, distorted loop that one would only expect from such a musical alchemist. And from then on, Dälek is on the offensive, addressing societal ills like racial inequality (“Truth festers under scab of lies/We the permanent underclass/don’t act surprised“), greed (“Who trades his culture for dollars? The fool or the scholar? Griot? Poet? White collared?“) and the sorry state of our country’s leaders (“I grow tired of tyrants passed as presidents/ Evidence of theft swept under oval carpet“).

The combination of Oktopus’ ultra-terrifying production and Dälek’s dark, soothsayer raps makes for a truly uneasy listen, but a really cool-sounding one, nonetheless. “Culture For Dollars,” despite being nearly seven minutes long, has some cool hooks, flowing into a chorus with a truckload of bass and distortion. Some of the chaos lets up during “Koner,” one of two instrumentals, but “Eyes To Form Shadows” brings it right back, introducing what sounds like a Hell-bent calliope into the mix. And “Ever Somber” is the most accessible track on the record, sounding like My Bloody Valentine backing El-P.

Chances are, you’ve never heard a hip-hop record like this before. And the reason for that, most likely, is no one has ever had the cojones to try it. Dälek did, however. And now it’s gonna take an even bigger pair to try and follow it up. Be afraid.