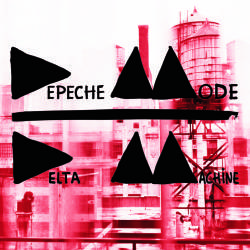 After 33 years, Depeche Mode have reached the comfortable position of not having to prove anything to anyone. Truthfully, they’ve been here for quite a while, at least since 2005, when, after all the interpersonal drama they experienced in the late ’90s and the creative wilderness of the half-decade that followed, the group reaffirmed their status as pop music dynamos with Playing the Angel. Perhaps not so surprising stylistically, the album nonetheless contained some of the band’s best songwriting in years, proof enough that the spark was still there — that Depeche Mode was still very much the same group of performers that once defined so many teenage years and packed in stadiums. They may have coasted a little on 2009’s excessive Sounds of the Universe, and the intervals between albums have gotten increasingly wider over the years, but if there was ever any question over their commitment as a band and as artists, there isn’t anymore.

Delta Machine, then, is essentially a victory lap. The group’s 13th album, Delta Machine continues to explore many of the similar sounds and themes that have continually cropped up on Depeche Mode albums since 1986’s Black Celebration. There are minimalist new wave pieces and exercises in gospel-influenced machine blues. Dave Gahan continues to use spirituality as metaphor for sins of the flesh. And while every other Depeche Mode album since 1997’s Ultra has been hailed as some kind of “return to form,” here it’s particularly apt, as Delta Machine stands as an effective, if imperfect, career summary. Even Delta Machine’s title (whose initials, not coincidentally, are D.M.) speaks to the band’s long-time aesthetic: it’s roots music translated through synthesizers and effects, more or less. That “Personal Jesus” of 1990 is resurrected once again.

Never ones to give themselves wholly to artistic reinvention, Depeche Mode’s greatest strength has always been in shining new light on the stylistic blend that fundamentally makes them Depeche Mode. So while Delta Machine ultimately contains all of those classic elements, they’re expressed in consistently interesting ways, tweaked and stretched just enough to reveal deeper shades and textures. It’s not always subtle — the raunchy, lascivious buzz of “Angel” puts a dirty, industrial spin on the tried-and-true theme of finding salvation between the sheets, Dave Gahan playing the preacher-loverman with renewed intensity. And the low-key strut of “Should Be Higher” is a satisfying bit of cinematic glam-wave, successfully pulling off what many of the atmospheric exercises on 2001’s Exciter often couldn’t.

The brightest moments on Delta Machine, however, are the ones that keep it reasonably simple. Amid so much distortion, throbbing and thumping throughout the album, the piano-driven ballad “Heaven” wins for letting a pretty melody be just that. It feels surprisingly natural, beautiful even, thanks in large part to a stellar vocal performance from Gahan, which is a refreshing change of pace after the snarling “Angel.” Minimal electronic pulses drive the cool, daring “My Little Universe,” while a throwback analog synth arrangement and a trunk full of hooks makes “Soft Touch/Raw Nerve” one of the most enjoyable Mode tunes on the album. And as much as “Soothe My Soul” falls back on the formula made “Personal Jesus” a smash, it still works here, bringing some buoyancy and verve to the album’s back end.

Much like its predecessor, Delta Machine might be better served with a bit of editing, some of its tracks relying a bit too much on familiar sounds or techniques. But these few weak spots never threaten to derail the album; they just temporarily halt its momentum. That’s not that much of a problem in the long run — there’s enough get-up-and-go on Delta Machine to make its 57 minutes gallop along quickly. While the core of Depeche Mode’s sound remains intact, the band is never content to remain inert, continuing to place their songwriting in a new and continually interesting context. If Depeche Mode have proven anything this deep into their career, it’s that their cup runneth over.