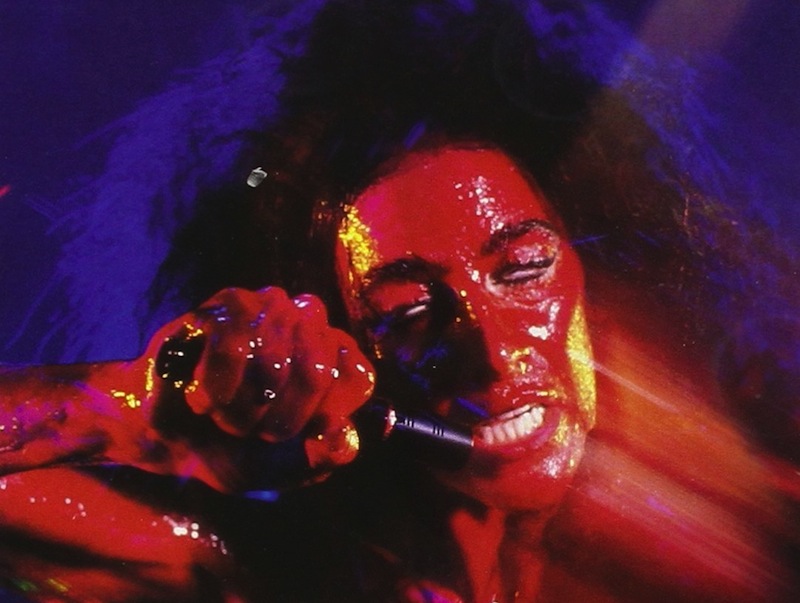 As she languidly approaches the curtain call of a storied pilgrimage, extreme music chanteuse Diamanda Galas‘ voice and theatrics—performing nude while covered in fake blood, ‘We Are All HIV+” tattooed across her knuckles and a relentless multi-octave attack among them—are the stuff of legend. With nearly 20 albums to her credit, the Greek-American soprano has tackled social issues, accosted the ears with alternately caustic and exalted sonnets, and generally been a curiosity for almost two generations.

Galas as a singer has attracted a cult following over the years for her idiosyncratic vision, impressive vocal calisthenics and passel of albums that defy most conventions. From the caws and whispers she emits on 1982’s The Litanies of Satan to gossamer wisps on 2003’s La Serpenta Canta, Galas is hailed by critics from the New York Times on down for her capacity to surprise and to shock. At her most rattling, Galas’ guttural screams, baleful voices and glass-cracking vocals are so unpredictable and seemingly come out of nowhere, skittering in like aggressive roaches hurtling at you from out of the dark.

In her time, Diamanda Galas has been an influence on everything from punk and noise acts to PJ Harvey and Zola Jesus. Now in her 60s and with two more albums to her credit in 2017, Diamanda Galas continues to be a musical and sociopolitical force to be reckoned with. Her discography presents many departures for the new listener. They include: 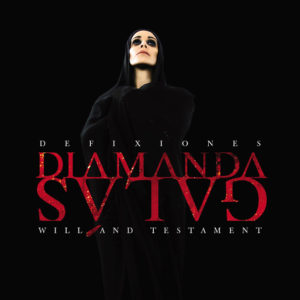 Defixiones, Will and Testament
(2003; Mute Records)

Defixiones, Will and Testament is one of Galas’ topical recordings. The 17 songs, packaged as a two-disc set with a small hardcover book in its physical form, address the still controversial Armenian, Assyrian and Greek genocides, which occurred between the years 1914 and 1923. Turkey has been held responsible at many points in history for these tragedies, although the nation has officially denied these allegations at many turns. Illuminating its story, Defixiones flexes Galas’ prowess in operatic and classical music, but the eccentric landscape has no less punch. Beyond her singing, Galas’ piano work, which is featured on many albums, is at its most exquisite. Hastayim Yasiyorum, Galas’ cover of Turkish classical artist Udi Hrant’s song, replaces Hrant’s oud with her keys to great effect. Peruvian poet Cesar Vallejo’s work Epístola a los Transeúntes gets a stunning piano reinterpretation with preserved Spanish lyrics. The tales are told in many languages, sung by Galas, and no language, or incomprehensible tongues. In spite of the potential for Defixiones to get tokenistic over its 90-plus-minutes, Galas is respectful of the material and tells an important story in the process. Where that story comes into focus is on tracks like Orders From the Dead, which concludes the first disc. “The world is going up in flames, but these flames are not new to our dead,” she croons. “Our dead did cry their final prayer in those flames. Our dead did sing their last lullaby in those flames.” 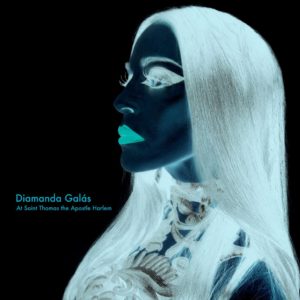 Something the casual fan may notice is the fact that Diamanda Galas’ collection contains a striking number of live performance albums. Pore over liner notes and you will discover that many of her tracks on studio recordings are, in fact, actually before audiences, too. Galas is surprising in this respect because, as music watchers may appreciate, live recordings are more difficult a venue to mask musical lilt or hide deficiencies. This Diamanda Galas stage performance album, her first since 2008’s Guilty Guilty Guilty, was released in tandem with the studio disc All The Way in 2017. It captures the singer at her traditionalist best (see Verrá la more e avrá i tuoi occhi, translated “Chronicles of the First Love”) and at her most dizzying, with requisite flat-out rejection of expectations, such as in her sometimes classical, always experimental 10-minute take on the bluegrass/folk standard “O Death.” A live version of “Artemis,” a song that recalls “My Love for You Will Never Die” from The Singer, speaks of the inevitable in narrative forms. “Love the one who loves you from the cradle to the grave,” Galas sings. “The one alone I love loves me dearly still. She is death.” These parables are core Galas traits, as is the multi-lingual musicianship carried forward across her arc of records. Moreover it is astonishing as chronicle of Galas’ vocal alacrity and improvisational creativity, even decades into singing as she does. 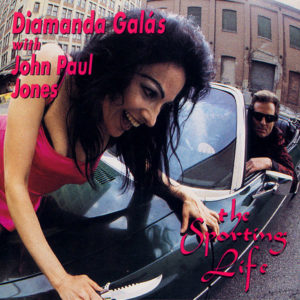 The Sporting Life was unusual as a followup to Galas’ 1993 avant-garde album Vena Cava. As the last recording in her trilogy on the scourge of AIDS, Vena Cava was undoubtedly the most gruesome. With tracks titled simply “Vena Cava 1-8,” Galas presented slivers of song, shrieks and silence that represented swings of dementia and depression brought on in the late stages of the illness. It’s a recording that presents “The Battle Hymn of the Republic” in such a way that you’ll never the same way again. So, partnering with former Led Zeppelin bassist John Paul Jones for a post-rock romp seems like the only natural encore in a Galas world. The Sporting Life is not one of Galas’ greatest albums, though it is one of the better examples of the artist as chameleon. Here, you get Galas’ biting tongue sprinkled with blues/rock sass on a cut like “Do You Take This Man?” The organ in “You’re Mine” gives Galas a fractured roadhouse vibe. And then there are entries like “Baby’s Insane” and “Hex,” which are far too weird to be blues yet too funky to be traditional rock ‘n’ roll or even avant-garde music. Life is an invigorating release to share with a new fan, especially one who might have once heard something like Life‘s followup, 1996’s terrorizing Schrei X, and been freaked out. 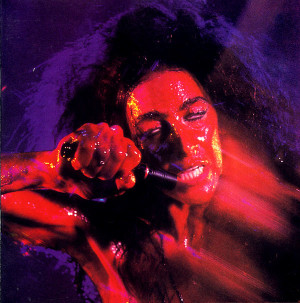 Today, HIV and AIDS education are accepted practice on college campuses, medical institutions and elsewhere. Younger generations should understand that attention on HIV/AIDS as a health crisis did not come without a lot of dead people and a titanic fight. AIDS in the 1980s was largely seen as a homosexual disease borne of promiscuity and illicit sex. The late Randy Shilts’ 1987 book And the Band Played On relayed to America the many people who succumbed to the illness and how political inaction, mired in what people today frankly regard as unequivocal homophobia, resulted in a reluctance to allocate resources that would change sexual behaviors and slow the epidemic. As the death toll to AIDS grew, groups like ACT UP staged rambunctious civil disobedience and provocative, in-your-face protests of federal agencies, media and the administrations of Presidents Ronald Reagan and George W. Bush. The slogan “Silence=Death” became a clarion call for activists and AIDS patients to get in the streets. For Galas, AIDS hit close to home. She first composed music about the disease in 1984, with the resultant album The Masque of Red Death. Her brother, Philip-Dimitri Galas, died of AIDS complications in 1986. In 1989, she was arrested during an ACT UP protest of the Catholic Church’s opposition to the distribution of condoms in public schools. Plague Mass, recorded in 1990 and released the following year, was intended to convey the pain of those afflicted and families touched by AIDS as well as the rage associated with cultural indifference to the disease. In her songs, Galas brought forth her harrowing songs to represent AIDS-induced suffering as well as furious indignation. There Are No More Tickets to the Funeral plunges headlong into this world, interpolating the funeral standard, Amazing Grace, with furtive cries and simmering spoken word. “For we who have gone before, do not rest in peace. We who have died, shall never rest in peace,” Galas says. “There is no rest until the fighting’s done.” Considered by many to be Galas’ finest recording, 1991’s Plague Mass has historical context that gives it gravitas.

Advanced Listening: Regarded as the best works of her early years (though if you can get your hands on her 1984 eponymous album, now out of print, you’re in for a treat), You Must Be Certain of the Devil (1988; Mute Records) clocks in at just over 32 minutes. However, it is quintessential Diamanda Galas, short though it may be. Devil is a good introduction to Galas for its presentation of the theme of religion. Faith and the eschewing of religious dogmatism come up frequently in her discography. As well, she does a number of Christian standards quite lovingly. On her fifth album, Galas utilized her five-octave range on hymns, spirituals and blues music, along with operatic tracks and experimental cuts, a pattern she continues to this day. Her greatest renditions of songs she’s offered on other recordings, especially “Let My People Go,” “The Lord is My Shepherd” and “Swing Low Sweet Chariot” are included on Devil. Fair warning, though. Galas’ delivery is perhaps more iconoclastic than the church-pew versions you may have heard before. Related to religion, Devil is also a look at another pattern in Galas’ musical career: interspersing the visage of darkness and death in song. At times, such as at in turns throughout her 1986 album Divine Punishment & Saint of the Pit, Galas pours on unfathomable despair. On Devil, the title track summons Biblical-style vengeance (“Be not merciful to the wicked transgressors… The key to the city is to the man who takes a gun“) as well as a haunting look back on life, such as on Birds of Death. Such meditations define many Galas songs for good reason: the imagery is universal as it is potent.