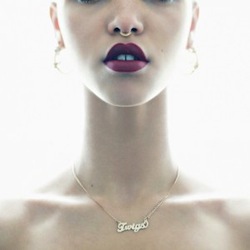 From a distance, it’s easy to look at EP2, the newest release by UK R&B artist FKA Twigs, as a keyword-loaded compendium of pop music trends of the past few years or so. She tackles atmospheric indie soul (like Jessie Ware, James Blake or The xx) with chilly claustrophobic atmosphere (like Burial or Andy Stott), and with the production aid of NYC producer Arca (whose biggest credit to date is Kanye West’s Yeezus — which, frankly, is a bigger get than most producers will ever work their way up to). Twigs’ is a good looking one-sheet, and a pretty accurate snapshot of where underground culture and pop music intersect right now. Without even the context of the music, EP2 seems engineered to cultivate hype.

That’s a cynical and/or market-oriented look at FKA Twigs, and not a wholly inaccurate one. But Twigs, the Gloucestershire-bred singer born Tahliah Barnett, offers something that goes deeper than music-blog SEO. Following the lower-profile release of EP in 2012, under the abbreviated name Twigs, Barnett is easing into a darkly cool space built on thick, hazy atmosphere. In fact, almost all 15 minutes of EP2 feel like a work of ambience more than songs. But just as poorly cultivated mood or tone can ruin an otherwise good song, atmosphere in itself grows thin without the support of good songs.

To FKA Twigs’ credit, there are four excellent songs on her second EP, all of which build up from a woozy, ethereal feel into an even woozier blend of beats, synths and her own ghostly vocals. Opening track “How’s That” takes a minimal approach, Barnett repeating a few key phrases as slow, syrupy beats escalate into a rapid skitter of breakout balls smacking against pixilated bricks. Even cooler is “Papi Pacify,” a darker dirge that underscores the desperation of a line like “Tell me I’m the only one” against a chilling soundscape. There’s less to cling to on the disorienting loops of “Water Me,” but “Ultraviolet” closes the EP with more abstract haunts, transitioning between murky interludes and brighter, sparkling passages of ‘90s-era slow jam R&B.

Coming to close after such a brief duration, EP2 gives itself little time to grow dreary or tiresome, but it does give FKA Twigs plenty of room for growth. Much of what she and producer Arca do is simply stunning, gorgeously expressing emotional darkness through a limited palette, putting forth a very specific tonal identity. Yet, while it’s still early for this young artist, it’s interesting to think of what she’s capable of doing outside such a limited circle of shades and hues. EP2 is a powerful study of grays and charcoal; I can’t wait for FKA Twigs to tackle primary colors.