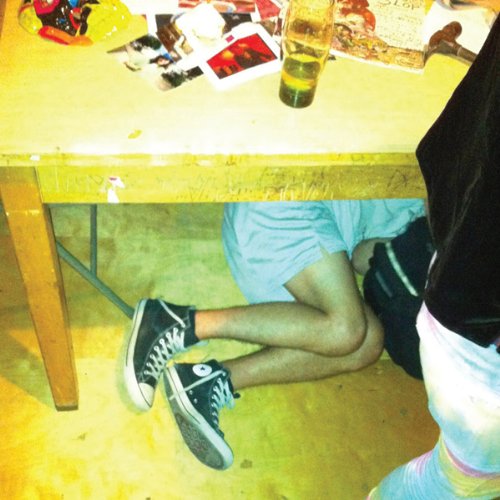 Guardian Alien is the avant-psychedelic project of Greg Fox, who is primarily known as the stellar ex-drummer of art-metal band Liturgy, although he is a prolific artist in his own right, having collaborated with projects/artists like Ben Frost, Dan Deacon, and New York experimental overlords, ZS. Fox acts as the sole captain of this third-eye vessel, and along with his crew of weirdo conspirators create the sort of music that seeks to obliterate the gap between listening and experience. Put simply: this is id music.

Guardian Alien isn’t a band so much as a vehicle of musical exploration, and Spiritual Emergency should be approached from that perspective for maximal enjoyment. On this, their third album, the band dials down the intensity a few notches, and move beyond the frenetic jam format into more nuanced territory. The guiding theme of the album is informed by the notion of the ‘spiritual emergency,’ which is defined by psychiatrist Stanislav Grof on the eponymously titled track, as an altered state initiated by a religious experience. Like on a ZS record, the song meanings exist in and outside of the tracks themselves.

The band forgoes the opus format of their previous record and delivers five distinct pieces. Opener “Tranquilizer” is noticeably restrained, eschewing peaks and valleys for a hypnotic procession. The landscape is dreamy and a bit droney – vocals fade in and out, a sitar-like instrument (called a Shaahi Baja) nods in the corner. It’s meditative stuff and shows Fox utilizing new drum techniques  – he forgoes his standard set-up for a tabla and sticks. “Mirage” is all fumes and fog – low-level feedback mingles with vocal hums that simmer in the murky atmosphere. Sandwiched between these longer compositions are “Mirror” and “Vapour” — short, quark-like sketches that skitter into existence as quickly as they burn out.

It’s on “Spiritual Emergency” that the working parts of the band assemble in their most crystallized form, and it makes for the most enjoyable effort of the album. It’s also the track where Fox delivers what the listener secretly wants, which is to hear him stir up a ruckus. In the midst of Fox’s percussive pyrotechnics, guitarist Bernard Gann lays down micro solos on guitar, and Alexandra Drewchin adds vocal and electronic flourishes. It’s new age music fed through a paper shredder. At its peak the musicians sound like whirling dervishes powered by psilocybin fumes. If there is a drawback to this composition (and the others) it’s that the supporting cast rarely feel more than ornaments to Fox, and this can pose problems for listeners (like myself) with shorter attention spans.

The varied style across the five tracks can make the album feel disjointed when taken as a whole, although it’s impressive to observe the ways in which the band has expanded their sonic repertoire: nontraditional percussive elements, post-production effects, the philosophical angle. The spoken word elements assist in contextualizing the material within a unifying framework, but how well that idea comes across in the music will remain subjective to one’s interpretation, and differ also depending on one’s substance intake. One thing is certain – the scope of the Guardian Alien universe is expanding, and it will be interesting to see where Fox takes it next.