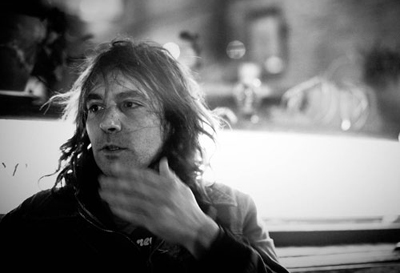 Philadelphia’s The War on Drugs play an unusual hybrid of sounds. At the heart of their music is an earnest, powerful classic rock sensibility, evocative of Bruce Springsteen, or Bob Dylan’s electric records. Yet the band layers their songs in heavy sheets of effects, yielding a uniquely American shoegazer sound. The band’s latest album, Slave Ambient, simultaneously showcases some of their best songs, while delivering a massive helping of dreamy atmosphere and thick waves of distortion.

When the band rolled through San Diego recently, frontman Adam Granduciel spoke with us about piecing together the various unique parts of the album, “living your lyrics” and the future of the War on Drugs.

Treble: So, you recorded the new album in North Carolina — what prompted you to head there?

Adam Granduciel: We didn’t do the whole record, we only did a little bit there. We went on this little East Coast tour, and I had read about Echo Mountain (Studio) in Tape Op. So we were doing a tour in Asheville, Raleigh… a couple other shows. And we had a bunch of days off in Asheville, so I booked a day there. And I was still working on the record. So we ended up doing “Brothers,” that version, because we were playing it live as a band. We did that in two takes, and we had more time, so we started playing “Blackwater Falls,” which is an old song. We just did it in two or three takes… just the basic tracks for it. Then we actually went back down a couple months later, in an attempt to finish the record, which we didn’t do, but we still did a lot of tracking on “Come to the City,” and mixing on a few other songs. We did “I Was There,” and a few other songs we didn’t finish.

Treble: You mentioned that “Brothers” only took two takes. Do you usually try to minimize the amount of takes you do in the studio?

AG: For the stuff we do as a live band, definitely. And then, usually… not everything is cut that live in the studio. It’s not pieced together either, but it’s built up. You know? You add drums, or you add this… or you cut drums, or whatever. Usually even when we’re doing overdubs, it usually ends up being one or two takes. Not even really sure what it is you’re looking for, but when you hear it you know it’s good. If it was a good performance, you’re like `Let’s keep it, that sounds like it’s probably fine.’ And then you listen back, and you add to it. So it’s definitely not a perfectionist thing. Not like this is exactly what it needs to be. Some of the best moments on the record just happened that way.

Treble: Did you have a general idea beforehand of what you wanted to do with the record, or did you take it song by song?

AG: Definitely song by song. I think the only thing I knew was that it was going to be… after Wagonwheel Blues, I spent a year refining my home studio situation, experimenting with stuff. Recording… not working on this record, but just other recordings. So after about a year, I had an idea of the way songs would be formed, in a way. I had the groundwork on a lot of different ideas, which turned out to be “Come to the City,” and some of the other ones. I knew I wanted it to be pretty expansive. But at the same time, I didn’t really know what it was going to be. Songwise, I tried to focus on one song at a time.

Treble: There’s definitely a lot of depth and heavier effects. What pushed you in that direction?

AG: I think just a lot of time working at home, coming up with ways of doing things. I wasn’t really consciously inventing, but just finding ways of doing things that I enjoyed, like just having a friend coming over and playing drums – just having a drum track. And then maybe slowing a tape down, and speeding it up, dubbing it out. Sampling and then re-sampling, adding some stuff. And also just a lot of processing. Going to my friend’s studio, and running stuff through an even tide.

Treble: Between Wagonwheel and Slave Ambient, some of the members of the band shifted around. How did that change the dynamic of creating a record and playing together?

AG: All of the records have been done without any totally live band takes. With the exception of Kurt (Vile), really, the first record was pretty much myself and Kurt. And maybe a friend played drums, but he wasn’t in the band. So, some people never truly left the band. It wasn’t a big deal. One had a baby… it was kind of always this Guided by Voices kind of thing. So really all the records have been made, including Slave Ambient, without any cohesive live band. In general though, just people filtering in and out of the band, back then, made it like… it had to be totally my thing at that point.

In the future, though, having a band that’s toured a lot, the next one will definitely be more of a live cohesive thing.

Treble: Did the songs that ended up on both Slave Ambient and the Future Weather EP, “Brothers” and “Baby Missiles,” go through a long process of evolution?

AG: Yeah. All the songs on the EP… not all of them, but a lot of them took a while to get to that point. I pretty much had the record budget for Slave Ambient, and I exhausted it by the time I put out Future Weather. I was working on a ton of stuff, so Future Weather was just like… I had spent a lot of time on that, so I just felt like it was a good family of songs to put out. But a song like “Baby Missiles,” I had spent so much time on that I just wanted it to be on the full-length. It’s just that kind of song, and it could reach more people than if it were just on an EP.

Treble: A couple of the songs on the record – “Come to the City” and “Your Love is Calling” – have lyrics that reference traveling or driving in some way or another. What draws you to that imagery?

AG: I don’t really know. Both of those were written in a way that lyrics came close to last. I had a bunch of really rough lyrics that I had improvised, and I was shaping with the arrangements. And I was just coming back to a few lyrics. But some of them were just in the moment, scribbling down a few lines. That’s always kind of a thing I’m just drawn to naturally, when I’m writing. I never really think about what kind of song or how to write a lyric. I just kind of approach it in the moment.

And those were both near the end of the record, too. I was kind of on an emotional journey trying to finish the record, and super obsessed with it and really close to it. Not trying to perfect it, but just wrap it up and I knew I was close to something I could be really proud of. I think it was just that idea too, just trying to get somewhere.

Treble: Do lyrics usually come later in the process for you?

AG: Not all the time. Sometimes, as I’m working on a basic idea, I start to see the song develop and I’ll work on lyrics right then and there. And as the song kind of changes over the course of time, I’m always doing different lyrics and coming back to different lines that I’m particularly fond of. So by the end, when the song’s fully realized, when I do the final vocal, I don’t even have the paper in front of me. I just kind of close my eyes and sing it, because I’ve been doing it most of the year. So it’s kind of gratifying. It’s kind of like, living your lyrics.

A lot of bands wish they could re-record their records after having gone on tour for a year. When you work on a song that long, it’s like, by the time it’s done, it’s kind of already gone through all that. Someone asked me if we reinvent songs live. And I wish I could say yeah, we take it in a totally different direction, but the reality is that we already did that while making the record. I don’t even know where else to take it. It’s already changed so much.