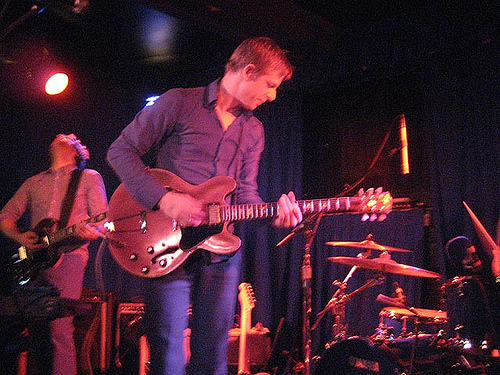 Saturday, 4:00 p.m. – I’m driving over the Bay Bridge that connects Oakland to San Francisco, hitting the sporadic patches of irritating, typical Bay Area traffic that I’ve somewhat surprisingly grown accustomed to. I’ve got Spoon’s latest in my CD player and I’m struggling over whether I should have left earlier to feel out the ticket situation at San Francisco’s intimate Café du Nord. See, this evening was the night of one from a series of “secret” Spoon shows announced at the last minute in celebration of their new album – a small show for which no advance tickets were made available, and could only be obtained by listening to KFOG or purchasing them at the venue’s box office on the day of the show. I had dutifully listened to KFOG all week, San Francisco’s station of “World Class Rock,” trying to win tickets, to no avail. Basically, there was no guarantee that I would be able to see my favorite band play at a show that would most likely be the first and last opportunity to experience Britt Daniel and company at such a small venue.

I call my concert companion for the evening to tell her that I’m on my way, and she informs me that she’d just driven by the venue . . . and that there are already about 100 people in line. At this point, slight panic sinks in. How many tickets do they have available still? More than 100? Less? Am I completely out of luck? Damn it, I should have left earlier and staked out my space, should have gone with my initial instincts. I begin to drive faster and weave in and out of traffic and curse my fellow drivers for being in my way, something I’m not known for, normally. But the thought of missing this seemingly once-in-a lifetime show brought out the beast in me.

We secure our place in line, which is still at about the 100-person mark. There are rumors that the venue will start selling tickets at 6:00 instead of 8:00 as advertised, which keeps us satisfied for the time being. In the meantime, we entertain ourselves by drinking Tecate beer wrapped in plastic bags (all class, all the way) and swapping life stories. The line slowly grows, wrapping farther and farther around the corner, and I’m at least happy that I’d gotten to the lower Castro city block as early as I did.

And at 7:00, we find that our perseverance of standing out in the wind and cold for almost three hours has paid off. About half the line, including us, are sold tickets and guaranteed entrance so long as we remain in line until 8:00, when doors open. We take turns running to use the bathroom at the dive bar down the block and grabbing slices from the pizza joint around the corner, and we wait. At this point, I don’t care that I can’t feel my hands and that my feet and legs already hurt – because I was going to see Spoon in one of the more intimate venues in the City of San Francisco.

Cut to the start of the show, because all other details are now irrelevant. Rogue Wave opens for Spoon, showcasing songs from their upcoming album, Asleep at Heaven’s Gate, which drops September 18th on Jack Johnson’s new Brushfire label. The local band also works in songs from their two previous albums, playing with great energy and focus – it was clear, in fact, that the band is just as excited to be in this small venue with Spoon as we the audience are. Towards the end of the set, Britt Daniel himself tries to inconspicuously stand by the stage door and take in a bit of Rogue Wave’s performance, but his tall blonde presence really can’t be ignored. I wasn’t close enough to, say, strike up a conversation and/or ask him to marry me, but I’m content just knowing that Britt Daniel is standing six feet from me, watching and enjoying the same show that I am. He retreats back upstairs, and Rogue Wave wraps up their stellar performance.

Cut to Spoon’s entrance. Britt comes out first, followed suit by Rob Pope and Eric Harvey, with Jim Eno bringing up the rear. They launch right into “Don’t You Evah,” my current favorite from Ga Ga Ga Ga Ga, thankyouverymuch, and the rest of the set is a spectacular mixture of Spoon history. Ga‘s tracks are performed excitedly and in the band’s typical clean-cut fashion (seriously, does this group ever make a mistake live?), and the rest of the relatively long set is fleshed out with samples of tunes from all of the band’s previous albums. Highlights: “The Beast and Dragon, Adored” (this song just kills live), “Advance Cassette” (a rare one), “My Mathematical Mind,” “They Never Got You,” “The Fitted Shirt” (appropriately enough, Britt’s own black fitted shirt is soaked to the bone in sweat by the time this song is played), “Anything You Want,” “Someone Something,” “Take a Walk,” and, well, everything else. I only mourn for the absence of “Small Stakes” and “The Way We Get By,” but I forgive them when the band closes the set with “Black Like Me” followed by “I Summon You,” arguably Britt’s most emotionally vulnerable tunes. He gazes fervently into the distance at no one in particular as he concludes the songs, making me wonder who/what he’s thinking about, and it’s so beautiful that we all just stare in awed silence.

At the end of the set, I realize that I’ve never felt so connected to a band during a concert – so dialed in to every song, so in tune with the music and sound that the band has managed to produce. It’s been a truly breathtaking experience, and I’m so grateful to have made it to such a unique concert opportunity. When Spoon becomes outrageously famous and I’ll have to sell vital organs in order to afford concert tickets, I’ll be able to say that I saw the legendary Austin band at a pint-sized venue right on the cusp of their success. I live a good life.