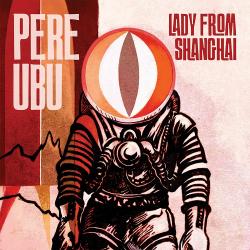 If you, like me, first glanced at the title of Pere Ubu‘s new album, Lady From Shanghai, and were reminded of Rod Stewart’s earnest, youthful declarations of love for his “slit-eyed lady…Shanghai Lil” in the title track of Every Picture Tells A Story (disregard the 1947 film), then you may feel just as disturbed as I did upon delving into the actual content of the album. In fact, it doesn’t take very long at all for Ubu to reveal that their titular evocation is just another (gleefully demented) instance of misdirection in their dense, oblique catalogue.

The opening track — named, simply, “Thanks” — shows their hand pretty much immediately. At first, the title seems innocent enough, perhaps even indicating the same rustic, carpe diem affirmation of life that undergirds Rod Stewart’s classic. Look how wrong you can be: it’s actually a disquieting noise dirge, assembled from a codeine-drenched breakbeat, a wash of concrete samples, and David Thomas’s hollowed-out, repeating wail of “you can go to hell,” the only lyric in the song. Emerson Dameron once described David Thomas’ voice as that of “James Stewart trapped in an oboe,” but here it sounds as if Scott Walker somehow got trapped inside David Thomas. Yes, it is that eerie.

Dameron, in that same review (of the band’s last album, Why I Hate Women), pointed out Ubu’s recent mitigation of the seeping anxiety in their early work for a new, “soulful…cryptic sadness.” That development is perhaps even more pronounced in Lady From Shanghai, as Ubu works the ironic “Thanks” into the even more ironic “Free White,” which opens with the nonchalant declarations of “it’s a wonderful world / it’s a beautiful thing.” The “inspirational” tone of these lyrics, coming on the heels of the previous song’s lyrical vitriol, is seriously disturbing, growing increasingly so as they are (similar to “Thanks”) repeated again and again. Eventually, they’re also underscored by a barely-audible growl, which gives the palpable impression of a sinister meaning lurking behind their vague, “happy” words. In that respect, Pere Ubu is operating here along some of the same lines that Big Star did (on Radio City and Third, especially), by delivering lyrics that seem whimsical and sincere but actually possess an extremely dark undertone.

And if there’s anything that this album has, it’s an extremely dark undertone. The third track, “Feuksley, Ma’am, The Hearing,” is more of a freak-out than a song proper, which is appropriate because it delivers on the subtle promise of insanity in “Free White” and leads into the centerpiece track, “Mandy.” The name of the game for Pere Ubu has always been deconstruction, and this song — an extended dance track (though it is only barely recognizable as such) — is a perfect example of this. With a pitch-manipulated, imploded dance beat behind him, David Thomas opens the song by painting a truly bleak picture of rural, Midwestern America: “I’m at the outskirts of nowhere, and the bottom of forever / I ride the bus into town; buses never leave / The bus driver is crazy.” At the same time, Thomas uses his hollowed-out soul croon to narrate the experience of his central character, who lives in this existential nightmare and is clearly nearing the end of his rope. Unlike the protagonist of “Kerosene” (a song which deals with similar subject matter), however, Thomas’ character doesn’t externalize his angst; he’s buried it and driven himself insane. As the lyrics unfold and he gets closer and closer to the home of the eponymous woman, Mandy, the refrain of “Won’t you come out to play with me, Mandy?” takes on a murderous meaning that the childishness of the lyric belies.

The remainder of the album that follows is quite rich as well, turning from the sparse arrangements of the first half into much denser, more electronic territory. “Another One (Oh Maybellene)” is a virtuoso pop song (the best one that Lambchop never wrote) and a perfect example of how experimental music enhances the genre. It’s followed by another standout, “The Road Trip of Bipasha Ahmed,” which showcases an impressive electronic arrangement that could just as easily have been composed by Matmos.

What makes this album is significant, let alone worth your time is that it’s a fantastic, standalone piece of experimental popular music; it’s a landmark (and the darkest entry) in the catalog of perhaps the most significant band of the 20th century; and, most of all, the cover art is awesome. Wait a second…is that a “slit-eyed lady” in an astronaut suit?