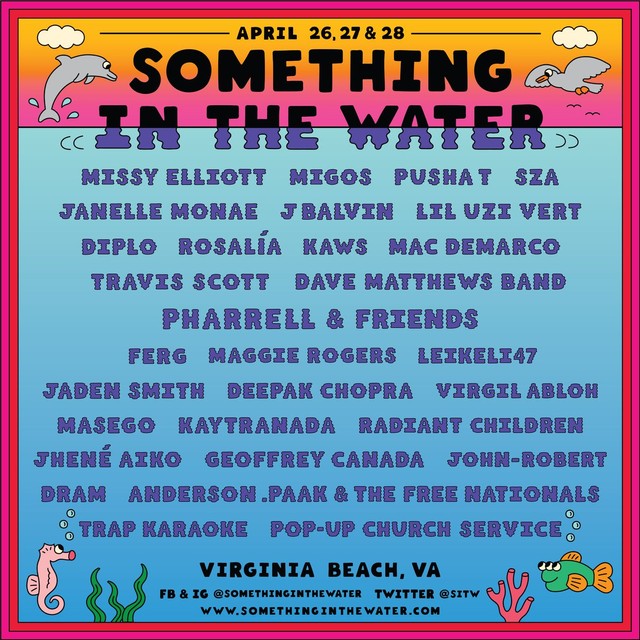 Pharrell Williams has announced the lineup for his inaugural Something In the Water festival being held in Virginia Beach, Virginia, April 26-28. Live sets will be held at the beach and on oceanfront stages as well as at the Virginia Beach Convention Center. The festival is intended to “unite the community and celebrate the diversity and magic of Virginia Beach” while celebrating “the opportunity and the chance to empower everyone from the youth to the small business owners.”

The weekend will include performances from Pharrell and Friends, Travis Scott, Pusha T, Missy Elliott, Pusha T, Janelle Monáe, SZA, Mac DeMarco, The Dave Matthews Band, Migos, Lil Uzi Vert, Kaytranada, Anderson .Paak and the Free Nationals, Jhené Aiko, Jaden Smith and more, as well as an appearance from meditation guru Deepak Chopra, trap karaoke and a pop-up church service. That’s the flyer above with the full lineup. The billing, presumably, isn’t listed like Coachella’s, because there’s no way that Mac Demarco is more popular than the Dave Matthews Band or, for that matter, Travis Scott.