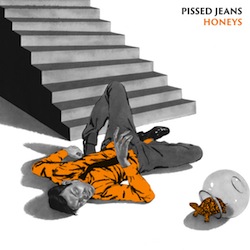 Punk rock has always been about empowering the individual, about standing up to authority and carving your own path in a system designed to keep that from happening. But suppose the individual is still flawed and prone to error. He kicks against the pricks but they keep digging deeper into his foot. He declares his own self-worth, but still might be best advised to seek out a second appraisal. He feels the same things we do, understands the same problems that most of us go through, but for some reason his own rites of passage are just that much more tragicomic and neurotic.

This everyman is Matt Korvette, frontman of Pennsylvania punk rockers Pissed Jeans, and he’s fighting the good fight against a mundane and sometimes horrifically ordinary existence by squaring his focus on the absurdity of it all. As part of one of the most gut-churningly rowdy bands in the United States, he exorcises his demons with intense screeches and bellows, sounding at times deranged, at others strangely cool and collected in spite of the sludge and humiliation that surrounds him. And fronting a band that has long been compared to The Jesus Lizard, Korvette’s presence is a hair’s breadth away from that band’s David Yow at times, but that sliver of difference is, contextually, even larger. Yow barked lyrical “Aristocrats” jokes like an escaped mental patient; Korvette is reciting Seinfeld episodes via primal scream therapy (and these pretzels are definitely making him thirsty).

It’s even more fun than that sounds. On the band’s fourth album Honeys, Pissed Jeans continue to shine an unflattering light on every day existence via sludgy post-hardcore riffs and increasingly catchy melodies. For as much as the band had progressed between 2007’s Hope For Men and 2009’s King of Jeans, Pissed Jeans have reached an even higher plateau here, honing in on an immediacy that’s always been present, but never quite so damn catchy. Not that the intensity ever wanes — after 20 seconds of dirty, dingy bass thrum, “Bathroom Laughter” erupts into a manic litany of power chords and human misery: “Bathroom laughter leads to kitchen crying/ Don’t make me say I told you so.” “Chain Worker” drops the BPMs about five-fold while Korvette laments an existence “caught in an infinite loop/Like a skipping compact disc.” And the tempo swings back up again on “Romanticize Me,” in which our narrator tries his hand at some lazy, backward seduction: “Take all my faults and twist them in your head/ Till I look like a sweet and thoughtful man.”

Relationships in particular prove a sticky wicket throughout Honeys, whether with online dating service matches (“You’re Different (In Person)”), officemates (“Cafeteria Food”), health care providers (“Health Plan”) and, yes, even cats (“Cathouse”). This is where the band’s cathartically manic sludge proves especially satisfying, whether as an ominously grooving background to wishing death on a project manager or as a four-chord punk rock rave-up to bolster Korvette’s tortured yelps about pet allergies. Pissed Jeans has never sounded quite so versatile musically, stomping with a glam-rock swagger here, churning with pigfuck tension there, and even approximating Mudhoney riffing on Earth on album closer “Teenage Adult.”

Matt Korvette isn’t shy about broaching topics that make us cringe, no matter how commonplace or awkward. But there’s a considerable difference between having a therapy session and making art. In Korvette’s case, a good sense of humor and some nimbly noisy musicians to capture his vents and crystallize them in righteous muck certainly furthers his case. Pissed Jeans are here to entertain as much as empathize, and while the latter might vary dependent on whether you break out in hives at the sight of cats or suggest your girlfriend merely imagine that you’re a better person, they’ve got the entertainment part down cold.