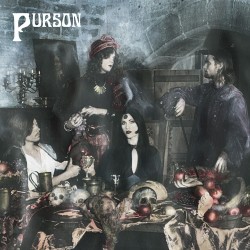 It’s been said time and time again that those who forget the past are doomed to repeat it. But lucky for those who have forgotten the doom of the past, there’s a renaissance of sorts happening for classic sounds in metal and occult rock. Truthfully, it’s been happening for a while now, with acts like Jess and the Ancient Ones, Blood Ceremony, Uncle Acid and the Deadbeats and Ghost reviving a particularly ‘70s and ‘80s-flavored brand of classic doom, authentic enough that you can practically smell the candle wax. The altar of sacrifice is prepped anew, and ready once again for an era of ceremonial debauchery.

A fairly recent arrival to the party, Purson is certainly one of the most impressive of the new wave of proto-metal purveyors, deftly balancing a breathtaking knack for pop melodies with gleefully ominous occult undertones. Taking their name from a Great King of Hell (with 22 demon underlings!), Purson recall a nearly forgotten age of classic spook-weirdo rock, the likes of which were made infamous by musical demonologists like Black Widow and Coven. They dispense with fat, fuzzy doom riffs throughout the course of the 11 tracks on new album The Circle and the Blue Door, backed by buzzing organ tones and the powerful pipes of vocalist Rosalie Cunningham. It’s vintage in tone and aesthetic, yet Purson’s songwriting is both impeccable and oddly timeless; whatever old-time Halloween vibes there are on this album, they come across as unexpectedly contemporary.

Throughout the course of The Circle and the Blue Door, there are strange swirling sounds of Wurlitzer and calliope, as if to welcome the listener into some bizarre, Hellacious carnival. In a sense, that accurately summarizes what The Circle and the Blue Door is, but the group has songwriting chops that extend beyond novelty or pastiche. A standout track like “Sapphire Ward” holds its own via hard-driving Sabbath-like riffs and meaty layers of heady organ. The waltzing “Rocking Horse” traipses between delicate acoustic plucks and disorienting throes of psychedelic ecstasy. And the UK-based band isn’t particularly shy about shining a light on their influences either; there’s a pretty pronounced Deep Purple and Jethro Tull vibe throughout, and the fiery “The Contract” even takes a brief interlude to nick the vocal melody from the Doors’ “People Are Strange.”

Just as crucial to Purson’s sound is that of English folk rock a la Fairport Convention or Pentangle, which is at its most potent in “Tempest and the Tide.” In fact, it’s often in the quieter moments in which the band’s musicianship, and in particular Cunningham’s amazing vocals, sounds its strongest. And yet, a song like “Sapphire Ward” is sufficiently rocking to the point that an entire album of these acid-tipped romps would be just as satisfying. It’s to Purson’s credit that they don’t allow the listener to overdose, however; there are many intricate and complex facets to this band. Indeed, a theatrical investment in the past — be it via ‘70s-era psych-rock or thousands of years of human interest in that which can’t be understood — is what makes Purson seem, initially, so fascinating. But without the musical chops to back up their dramatic persona, all the theatrics in the world wouldn’t amount to a satchel of Wolfsbane; bully for Purson, then, that The Circle and the Blue Door has them in spades.