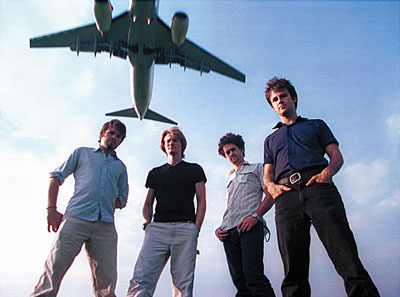 When the four individual members of the Dismemberment Plan went their separate ways in 2003, there were no explosions or meltdowns. Nobody went to rehab. Nobody went to prison. And their friendships remained intact. Maybe it’s not the most sensational way to end a decade as a band, but following a tour on which every night’s playlist consisted of requests shouted from audience members, the most danceably spastic and fun post-hardcore band in the United States called it a day on a high note, both personally and professionally.

Some things are too good to put to bed permanently, however, and as such, the band’s fan-request tour in 2003 would not be the final time Travis Morrison, Eric Axelson, Jason Caddell and Joe Easley would be on stage together. A few years later, the group played two shows as a benefit for Callum Robbins, son of Jawbox’s J. Robbins, who was diagnosed with spinal muscular atrophy in 2006. And late in 2010, The Dismemberment Plan announced that, once again, they would be playing ten more shows across the country to bring songs like “What Do You Want Me To Say?”, “The Ice of Boston,” “Do the Standing Still” and “The City” to audiences in a few lucky, select cities, including New York City, Boston, Seattle and the band’s home of Washington, D.C.

The band’s current tour coincides with the re-issue of their 1999 landmark album, Emergency & I, which has been pressed on vinyl for the first time. In addition to being able to hear the jittery weirdness of songs like “Memory Machine” and “Girl O’Clock” on vinyl, fans will also be treated to four bonus tracks (including “The Dismemberment Plan Gets Rich”), expanded artwork and extensive liner notes from The A.V. Club‘s Josh Modell.

We caught up with Plan bassist and keyboardist Eric Axelson to discuss the tour, the reissue, and the perspective that a little bit of distance can give.

With this being the second set of shows the band has played since officially ending the Plan in 2003, was a tour something the four of you had talked about doing for a while? Or was this a more recent development?

It was more recent. When Travis came down to D.C. to work on the tapes and art for the reissue of Emergency & I, we noodled in the basement and started thinking that it would be fun to play some shows around the release. And what started as being “3 or 4 shows” turned into 10 in the States, and 5 in Japan.

How rusty were you playing together after so many years? Did some of the songs come as second nature or was extra rehearsing required?

We often found that if we didn’t think too hard, the songs were in our hands, but yeah, we all needed to work off the rust. First few practices in October and November were a little scary, but by January it felt like we were the same band again, maybe tighter / less spastic.

With the Emergency & I reissue out this week, will the shows mostly focus on that material? Or will you take on songs from all four albums?

It’s been a mix of all our records, though leaning more on the last two albums.

What was the motivation behind the E&I vinyl reissue?

People had asked about it, or suggested it, over the years. This time it was Josh Modell from The Onion, whom we’ve known for years, that got the ball rolling. Now that it’s done, we’re so happy with it – it sounds and looks just the way we’d imagined.

Why specifically E&I over the others? Does the album represent, to you, a creative peak for the band?

Partially that, but it’s also the most popular with fans of the band. Live, those are the songs the get the most requests, and that record out sells the other three easily.

Having not played or, presumably (and feel free to correct me on this) listened to those 12 songs in a while, have your impressions of the album changed since first writing/recording it?

There are moments where we look at each other saying “what the fuck were we thinking when we wrote that?” Not the whole song, but some parts make less sense now than they did in 1998. Then again, we’re very different people and have different tastes now than we did in [our] 20s. I do still love listening to the record, even though I only do it once or twice a year.

Are there plans to press any of the other albums on vinyl?

Not right now, but I wouldn’t rule it out.

After this tour, what’s next for each of you?

Some sleep. It’s been interesting juggling our full time lives with being in a full time band again. The last show in March 12 in Seattle, and after that we’ll give it a break, and then talk about how it went, see what folks are feeling. It’s hard to say if we’ll do this again or not, but I’m glad that it’s happening right now!