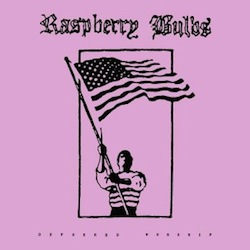 On a grand scale, the gulf between black metal and hardcore punk isn’t really all that vast. In terms of philosophy and politics, there’s little consistency to be found, which isn’t really all that surprising — black metal alone can span from one extreme (Communism) to the next (National Socialism), without bands from either camp sounding all that different. Yet hardcore and black metal share an aesthetic ethos that checks a lot of the same boxes, regardless of whether they wear spikes on their shoulders or vomit blood. DIY recordings, lo-fi production, distortion, screaming, intensity, speed, vitriol — these characteristics apply to either or both with consistency and regularity, to the point that it’s surprising there aren’t more “blackened” hardcore bands or black metal bands that gather round the mic for a gang-vocal shout session.

It’s a bit of a stretch to call Raspberry Bulbs a blackened hardcore band. More accurately, it’s a hardcore project helmed and founded by a black metal musician, namely Bone Awl member He Who Crushes Teeth. He, whose real name is Marco Del Rio, fronts a raw, lo-fi and scrappy hardcore outfit that also features ex-members of Rorschach and Italian Horn, and while Deformed Worship is Raspberry Bulbs’ second album, it’s the first to feature a full band. Much like Bone Awl’s recordings, Deformed Worship is dark and distorted, with reverb-caked growls and an overarching sense of menace. Yet there are no blast-beat rhythms to speak of, nor ominous descents into evil — just nine tracks of simple, well-written and kick-ass punk rock.

That Raspberry Bulbs has expanded to a fuller, five-piece band makes a considerable difference on Deformed Worship. Though the recordings are raw, the dynamic of the band is sharp, building up from a low rumble into a blunt explosion on “Cracked Flesh,” tearing through a snotty, garage-y assault on “Lusty Climbing,” and easing into a badass swagger on “Standing In Line.” And it’s here where Raspberry Bulbs seem like neither a hardcore band nor a black metal band — neither one generally has much sex appeal, after all, and there’s a twinge of down and dirty sleaze here that just might find its way as a pre-game for horizontal stimulation. But just in case a reminder of Del Rio’s ability to make skin crawl was ever in doubt, the transition from an ominous spoken-word sample into a slow-motion beatdown on “By the Root” serves that need quite spectacularly. For all of Del Rio’s kvlt cred, though, when he gets back to basics, he and his Raspberry cronies can still wreck a room the old fashioned way. This ain’t genocide, this is rock ‘n’ roll.

Coliseum – House With a Curse

Raspberry Bulbs : Before the Age of Mirrors

Raspberry Bulbs announce new album, Before the Age of Mirrors