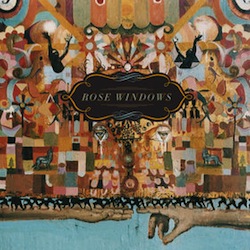 It’s not fair to judge a book – or a record – by its cover, nor is it fair to draw conclusions based on song titles alone. But in the case of Rose Windows’ debut, The Sun Dogs, listeners would be advised to do just that before delving into the music. The artwork, a tapestry of earth tones, coyotes, and flowers being hoisted by a line of dark figures walking across arms that don’t quite reach one another, evokes Native American culture. Song titles such as “Season of Serpents,” “This Shroud,” and “Native Dreams” strengthen the assumption that pan flute is going to be featured in this album.

And it is, in all its reverb-laden glory on “Native Dreams,” the second track. Accompanying this instrument is sustained droning and Middle Eastern modalities, all of which bring to mind heat, desert and shirtlessness. The Sun Dogs begins with part one of its title track, subtitled “Spirit Modules.” It’s a slow, mellow soundscape accented with instruments mimicking wind and animal sounds. It doesn’t take long for vocalist Rabia Shaheen Qazi to describe the aforementioned spirits in a captivating drone. Her voice is the star of the band for sure, even if it’s not intended to be. She sounds like Grace Slick and Perry Farrell’s love child, if that child were released into the wild when she was 13 years old.

The songs, composed by founder and guitarist Chris Cheveyo, feel authentic in this style, and perhaps he is attempting to update the music and tones of his own lineage. But in doing so it makes the listener question not his place on this planet, but the place for this music in 2013. The problem is not that the performances or songs are lacking. On the contrary, the musicianship is strong and the production is crisp. The music works best when it starts to rock, like in the middle of “Walkin’ With a Woman.” The problem is that it all comes across as overwrought, self-indulgent, and solipsistic, and that is likely the opposite of what his inspirations intended to accomplish. This music is meant to be shared and experienced, but in this case the listener could be alienated by lack of interest.

Rose Windows has the talent and gumption to have a future, but they might be served by incorporating a little levity and self-awareness into their music. Sometimes when a band takes its vision this seriously, it’s enough to stop anyone else from paying attention.

Earth – The Bees Made Honey In the Lion’s Skull