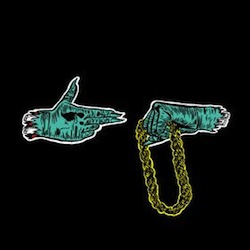 El-P’s exclamation addled question that opens “Run the Jewels,” the first track on his eponymous collaborative album with Killer Mike, is merely a rhetorical device. See, he’s not really asking, he’s laying out the scenario cleanly, aggressively and with rapid-fire, lethal accuracy: “It’s alive and it’s hungry as fuck/ Better hide all the snacks and the dough/ It is out of my control, you are shit out of luck.” What we have here is a rabid, snarling beast ready to tear through the neighborhood, teeth bared and claws out. It’s called Run the Jewels, and it’s a monster.

In hindsight, a full-length collaboration between the two 38-year-old rap vets seemed like an inevitability after the release of Killer Mike’s R.A.P. Music, for which El-P, née Jamie Meline, claimed sole production credit. Though each came from different backgrounds with a different perspective — Mike a Southern rapper with an eye toward street-level social consciousness and Meline a wisecracking New Yorker with dark, apocalyptic visions — as a team, they provide a perfect complement to one another. Mike gave El’s gritty boom a touch more organic humanity, while El’s production (and guest verse on “Butane”) gave Mike’s bullshit-free verses added weight though explosive sound enhancement. In turn, Mike guested on El-P’s “Tougher Colder Killer,” on last year’s Cancer 4 Cure, and though the two emcees had only tag-teamed verses a couple of times, it was hard to see the duo as anything other than natural collaborators — a by-product, no doubt, of simply drawing pure enjoyment out of each other’s company.

Run the Jewels bears out, over 10 tracks, just how compatible a musical duo Killer Mike and El-P are, simply by displaying the amount of fun they appear to be having in the studio. A free mixtape spanning only 32 minutes, Run the Jewels’ debut is a lean, efficient set of bangers — and bangers they most certainly are. In contrast to the juxtaposition of highs and lows that made R.A.P. Music and Cancer 4 Cure such powerful, balanced hip-hop albums, Run the Jewels simply goes straight for the jugular and holds its death grip tightly for the full half-hour.

That probably makes Run the Jewels sound pretty dark and menacing — that’s to be expected, perhaps, but it’s actually the most effortlessly fun release either emcee has been involved with in the last two years. Some of the menace that bubbles underneath comes from Meline’s production, which comes loaded with the kind of massive synths and distortion that have marked his sonic approach since his Def Jux days. But while he and Mike go H.A.M. and never let off the intensity, it feels more like a victory lap than a grudge. Mike turns braggadocio into a higher art on “Banana Clipper” (“I move with the elegance of an African elephant/ I presented the evidence/ eloquent as the president”). El-P makes driving a getaway car sound like terrifyingly reckless fun on “Sea Legs” (“On the lam in a hatchback, blasting some rap shit, trying not to slam into traffic”). And explosive standout “Get It” is just the kind of dressing down that could convince wack emcees to hang up their battle gear for good.

Killer Mike and El-P don’t half-ass a single minute on Run the Jewels, but one shouldn’t confuse that for it being an overly serious piece of work. They’re serious about what they do, but in a refreshing contrast to some of the more tiresome sex raps out there, the duo invites Prince Paul to play less-than-smooth loverman (“I got you a glass of Beefeater, a brand new deck of Uno cards… Oh yeah, baby, the night’s just getting started”). That kind of levity goes a long way on a record with beats that could make bridges collapse, though even when going hard in the paint, Mike and El don’t shy away from a laugh. There’s time for existential dread and sociopolitical name-taking in the future, but for Run the Jewels, having a good time seems to be the chief priority.