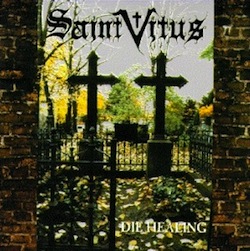 When a band replaces its singer — assuming there’s just one frontman or frontwoman — it’s only natural to be skeptical. That voice is a crucial key to the band’s identity, its soul, even, and to substitute someone else’s vocals can dramatically change both the character of the band and how their music is perceived by listeners. While there’s plenty justification to view the ol’ singer swap with doubt and uncertainty, it actually happens all the time. It happened with AC/DC, and it worked, for the most part. It happened with Van Halen and didn’t, for the most part. And in metal, that list goes on for pages and pages — Black Sabbath, Iron Maiden and Judas Priest, three bands who have had the most prolific and influential careers of any metal act, have each had at least three different vocalists.

Los Angeles doom metal icons Saint Vitus, likewise, have rotated vocalists enough times that in the span of seven years and three albums — from 1989 to 1995 — they had three entirely different madmen on the mic. Scott “Wino” Weinrich helmed the band from 1986’s Born Too Late up to 1989’s V, and is now currently the band’s lead bellower. Christian Lindersson briefly took over for 1992’s C.O.D., but by 1995, Saint Vitus had once again recruited their original singer, Scott Reagers, to bring the band back into the murky doom depths from where they began. With original lineup intact, 1995’s Die Healing once again presented a portrait of Saint Vitus as old-schoolers once recognized them, even if by the mid-‘90s that was a fairly small circle.

As significant as it might have been for Reagers to rejoin the band in 1995, it’s not entirely correct to call Saint Vitus’ Die Healing — now reissued by Season of Mist — a return to form. Saint Vitus’ form was the same as it had always been, and as it remains today. The band’s forte is slow, murky doom metal, sans gothic flourishes, orchestral arrangements, boogie breakdowns, brief excursions into hardcore or thrash, or really any other variation from the formula. That much should be pretty apparent from the album’s grim, but very cool cover art, depicting a pair of tombstones behind some iron gates. It’s dark and spooky, much like the loud, churning dirges that the band oozes out. The band’s straightforward approach, though highly effective in terms of atmosphere, might not be quite as engaging without Reagers’ vocal theatrics to spice them up. More operatic and dramatic than he was on the band’s debut, Reagers leaps from an ominous croon to a fierce growl, offering up comic-book horror one liners such as “We’re in the same slimy boat/ And it’s gonna sink!” or “Beware — the SLOTH!” And likewise, the cartoonish fun that Reagers brings to the band might have been a bit too silly, were his lyrics not backed by layers of thick, guttural doom. It’s a combination that works simply because all of the elements complement each other — Reagers’ maniacal vocal performances, Armando Acosta’s slow-mo rhythms and Dave Chandler’s sludgy, occasionally psychedelic doom riffs.

One year after the release of Die Healing, Saint Vitus broke up, though 2008 found them back to touring, only now with Weinrich at the helm. Acosta left the band in 2009 and, sadly, died in 2010, but the band’s doom-metal express keeps on rolling, and it sounds as fierce and raw as ever, which is to say that the Saint Vitus sound is one practically immune to being influenced by era or outside factors. Saint Vitus is, was and will always be a vessel for sluggish, creeping doom, and for a while it seemed that Die Healing would have been their final rumble. That turned out not to be, but even so, it would have been a pretty badass way to close those creaky cemetery gates.

Hold On To Your Genre: Doom Metal

The 90 Minute Guide: Metal, Part One