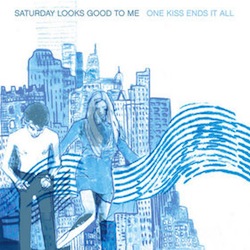 As a matter of full disclosure, this reviewer was a part of the likely-small group of listeners who were genuinely excited about the prospect of Fred Thomas putting out another album as Saturday Looks Good to Me. A full decade’s worth of reviews has already demonstrated that it is apparently impossible to review SLGTM without mentioning ’60s pop, so I’ll go ahead and get that out of the way: I have a special place in my heart for the music of the ’60s, and Thomas’s channeling of it generally plays on my heartstrings. That said, my expectations for the album that would become One Kiss Ends It All were tempered from the beginning by remembrance of 2007’s very imperfect Fill Up The Room. In any case, I thought, I could count on a euphonious listen (it being SLGTM, and all), so here I am.

In respect to euphony, there’s no disappointment to be had. The album starts off nicely enough, with the short, spacey introduction of “One Kiss” leading into the early standout “Invisible Friend.” “Invisible Friend” is placed well, counteracting the sleepiness of “One Kiss” with its rousing, metrical declaration (and possible Moby-Dick reference?), “eve-ry-where-I-go / there’s a shadowy hand holding my hand.” Thomas tips his own hand a little bit here, too, imbuing a jangly, upbeat song with dense production and a sense of vague mystery. “Empty Beach” is similar, with big production overlaying a fine, laid-back pop song. Unfortunately, “Empty Beach” demonstrates one of the main flaws with One Kiss Ends It All — Thomas’ production is overwrought. He places a solid thirty seconds of icy synth (which sounds like it belongs in Pink Floyd’s Animals) at the end of a pop song that would otherwise be a concise 2:50, dragging it out for no apparent reason and crippling the album’s momentum going into “Negative Space.”

Fortunately, the opening of “Negative Space” compensates for that misstep, with a confident, understated first half that builds upon 60s tropes — a surf rock riff and an abstract backing vocal — and shows Thomas at the top of his songwriting form. Unfortunately, Thomas kills that momentum again with a sudden, ambient interlude before returning to finish the song proper. In the next song, “New City” — an otherwise stellar homage to Detroit, replete with Motown horns and all — the vocals unexpectedly drop out of the mix in the middle of a verse (though this is not nearly as detrimental) for no apparent reason. Thomas almost certainly has a conceptual impetus for these decisions; “Negative Space” makes that clear. But his execution does not always justify it, often burying the words and meanings of his songs underneath a wash of chamber pop flourish.

Side Two starts off much better, with “The Everpresent New Times Condition” and “Break In” containing some of the more well thought-out compositions on the album (e.g. the crashing horns on “Break In”), as well as some of its best vocal production. “Break In” leads into “Polar Bear,” which (though pockmarked by another unnecessary outro) pretty much encapsulates all the pros about One Kiss Ends It All in one song: gorgeous, catchy elocution; a subtle interplay between electronic and orchestral instrumentation; and striking lyrical turns: “There’s nobody there no more / down in a broken church.” However, “Johnny,” which is curiously reminiscent of Ween, seems way out of place, too indirect and murky to achieve the poignancy that it strives for. The syrupy teen-pop of “Are You Kissing Anyone?” also misses the mark, too static to be striking and too trite to provide any serious emotional impact. The song that follows these two, “Sunglasses,” is, however, one of the best songs on the album, working along the same lines of “Polar Bear” with similar effectiveness. The closer, “Space Children,” is a mixed bag — almost a microcosm for the whole album — with an almost-equal mix of vague meandering and striking melody.

If you’re thinking that these criticisms of One Kiss Ends It All are intended to insinuate that it is not worth your time, allow me to clarify: OKEIA is a good album, with a few fantastic songs (“New City,” “Polar Bear,” “Sunglasses”), mostly good ones, and only a couple missteps. The issue is that it could have been much better. Normally, the same flaws show up consistently in indie pop: preciousness, half-assed songwriting, unoriginality and too much subtlety (masking charlatan work). Fred Thomas nearly avoids all of those here, providing an album of well-composed and melodious music but, in an attempt to make Pet Sounds or What’s Going On, overloading it with production and burying the soul of the music. Dig, listeners, dig!

Camera Obscura – Let’s Get Out of This Country