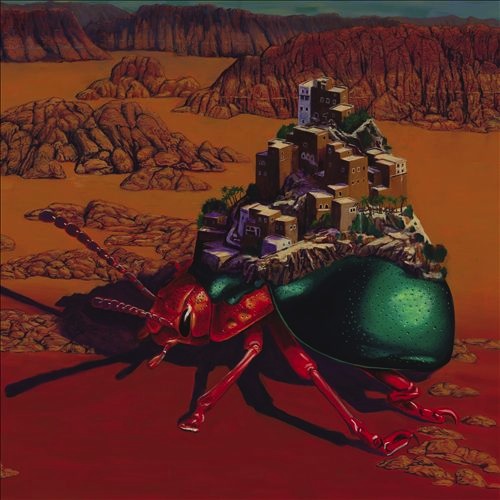 Survival Knife‘s first single, last year’s “Name That Tune,” wasn’t necessarily a groundbreaking track, nor was it fodder for hype cannons. And yet, it’s an important song, for one simple reason: Justin Trosper. After the break-up of Unwound in 2002, Trosper stepped off the stage for nearly a decade. He went back to college, recorded other bands, and occasionally contributed some guitar to Young People or Magic Magicians recordings. But as a songwriter — and as a performer — Trosper spent most of the ’00s in hiding. And if he were to write off performing from that point on, he still would have had one hell of a legacy to look back on. Instead of leaving it at that, or possibly more dubiously — reviving it — Trosper reconvened with three other musicians, including early Unwound member Brandt Sandeno, and launched something entirely new.

What “Name That Tune” did unbelievably well is bridge the gap between the past and the present, without too much of a wobble in the direction of foreign or familiar. Certainly, hints of Unwound can be heard in its raucous punk rock sound, but there’s also something a bit more immediate about it that set it apart on a plane of its own. Loose Power, Survival Knife’s debut full-length, takes the energy and abrasion of that hard-rocking first track and fleshes those aspects out into a more cohesive and, for that matter, stronger set of songs. On Loose Power, Survival Knife sounds fully formed, the promise of their earliest noises congealing into a formidable whole.

It’s hard not to get a late-’90s Pacific Northwest vibe from “Divine Mob,” the hard-charging first track on Loose Power. But more than Unwound, the track evokes the punchy, avant garde punk of Sleater-Kinney circa Dig Me Out or The Hot Rock. It’s a thrilling start, to say the least, but as the album progresses each song gradually seems to get a little longer and more complex, showcasing a more progressive approach to punk rock that still allows plenty of space for hooks. Yet those hooks can be jammed between jerky riffs, as on “Fell Runner,” or menacing slo-mo sludge, like on the meaty throb of “Gold Widow.”

Trosper no longer sneers with the ferocity he did in the mid-’90s, though even when smoothly crooning lines like “A letter from an alien/ Never to be read/ By anyone,” his tone and timbre are unmistakable. Yet on the very same song — “Cut the Quick” — he still captures a unique intensity, reading the song’s title with a ragged fierceness. By contrast, when Trosper harmonizes with bassist Meg Cunningham on a chant of “Too big to fail!” on closing track “Heaven Has No Eyes,” he appears the more restrained of the two, delivering his indictment not so much with anger as with determination. Its an apt example in miniature of what Loose Power accomplishes as a complete piece. Survival Knife isn’t punk rock in its rawest or purest form, but with the space and patience that comes from knowing when to scale back or let off the accelerator. There aren’t many moments that so vehemently go for the jugular, but there don’t need to be — Loose Power burns slow, but it’s a heat that stays with you.