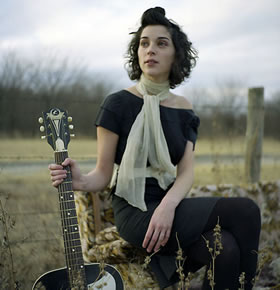 St. Vincent “The Apocalypse Song”
from Marry Me

Annie Clark, the charismatic chanteuse behind St. Vincent, is innocent looking. But one listen to stunning standout “The Apocalypse Song” from her debut album Marry Me is evidence enough of her carnal needs. The music itself is sumptuous and seductive, a gorgeous piece of Kate Bush style art pop. But it’s in Clark’s lyrical wordplay where the song becomes even more interesting. Not your typical song about gettin’ some, “The Apocalypse Song” puts sex into truly abstract terms. When she sings “carbon, my body, a million years of light” the apocalypse thing may start to make sense, but it’s not until she sings “you wake with the stitches over both your eyes/ and deny me my body and all earthly delights” that she begins to reveal her intentions.

Sex becomes a battle, a conquest, perhaps a rivalry. Clark expresses her frustration through the chorus “time and light/ I guess you are afraid of what everyone is made of” but becomes more aggressive during the second verse. She sings “all your praying moments amount to just one breath” before playfully exhaling, and then pleas, “please keep your victory/ but give me little death.” Anyone who knows their French would call this a single entendre. That this song is so highbrow and dirty is enough to make my head spin. It’s hard not to revel in the puns that Annie dispenses, in addition to the jaw-dropping, string-laden arrangement. That it thumbs its nose at puritanical moralists merely gives it bonus points. – Jeff Terich