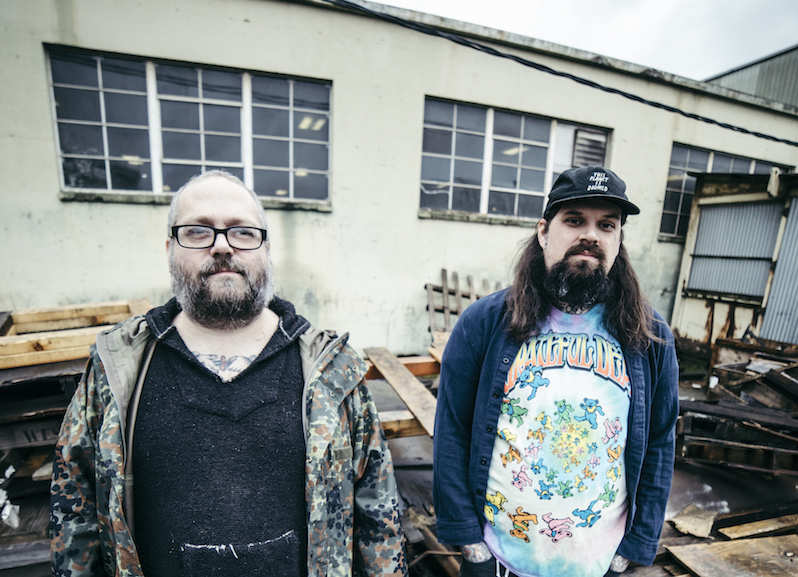 There is an astounding darkness to the music of The Body. As of 2019, the Providence, Rhode Island-based duo celebrate 20 years of creating experimental music. Over the years their creativity has allowed them to present some of the most captivating and emotionally compelling music of our time. Yet for drummer and programmer Lee Buford, a career in music was not the band’s initial intention.

“We didn’t think [creating music would become a career],” Buford says. “It was just us having fun playing music together in Arkansas.”

Blending all manner of sounds from metal, noise, pop and even choral elements, Buford and vocalist/guitarist Chip King defy simple labels. Having built up an impressively large catalog of studio albums, collaborations and EPs, The Body has compiled a diverse collection of work. The band’s 2016 LP, No One Deserves Happiness, provided a twisted pop appeal, utilizing tinges of bright instrumentation through grotesque compositions. Its follow-up, 2018’s I Have Fought Against It, But I Cannot Any Longer and that year’s EP, O God who avenges, shine forth. Rise up, Judge of the Earth; pay back to the proud what they deserve., make for even more somber experiences, emitting distortion and hysteria.

A lot of the intensity and darkness within The Body’s music is reflective of the mental health struggles and other internal conflicts that the duo explore in their songwriting. Their music provides a tangible delivery to digest and explore such conflicts. For Buford, these concepts naturally came through their music, evolving has the band progressed.

“[The Body has] always been about the hardships of life, but as [the project] went on, it’s definitely gotten more personal,” he says.

Buford acknowledges how exploring such themes through art can allow for one to work through struggles. “Personally I think it’s helpful to process things in this public sort of way; because when people do connect with [these subjects through art], it has a reassuring quality. Like maybe whatever you feel isn’t so alienating, and that there is a kind of universal suffering that other people feel to some degree.

“It feels great that people connect with it, and honestly very surprising,” he adds.

The relationship between heavy music and mental health is fascinating; how the art form can create a space to feel out one’s emotions and provide a catharsis. These qualities very well represent the work of The Body. Speaking to his own taste in music, Buford says he is more attracted to ominous vibes.

“I don’t really listen to much aggressive music. I feel like a lot of [popular music nowadays] is very grim, so I find myself listening to that more,” he says.

Through alternately bombastic and meditative compositions, The Body establish a masterful duality of chaos and serenity. The atmosphere presented throughout their material is otherworldly in a sense; with so much going on, even anxiety provoking at first, each track feels like a deep dive into their psyches. Through their music, the listener is given the experience of an intimate form of storytelling; each song comes across as a raw bearing of truth, defying all personal walls.

Buford further explains this duality in the band’s approach to writing and recording, and the emotional payoff of their process.

“The music that I always go back to, that hits me hardest, is always vocal based and rhythm based,” Buford says. “So usually our priority in the studio is getting good drum sounds and beats and building it up from there. Chip’s guitar is usually so blown out also, [playing] more to rhythm [rather] than a [melody]. Then the addition of his vocals with a choir or other people makes that dynamic that I really love. I guess we’re all about opposites. Having some heavily distorted song with a choir over it kinda covers all the bases I wanna hear in music. I think because of that it does have a cathartic effect to it, at least to me.”

It’s not always easy to know what to expect when coming into one of The Body’s records. The range both Buford and King explore is not only extraordinary, but liberating. At the core of their process is an essential “limitless” ideology.

“We have a kind of limitless view of things now as far as recording goes,” Buford says. “When we first started out we were used to playing in punk bands, so we thought about things very much as ‘traditional’ instrumentation and delivery; but now we have way more resources as far as what we can have on recordings and also how far we can push things. I think people have gotten used to us doing whatever and not sticking to one thing so that’s very freeing artistically.”

He continues, speaking to the band’s creative drive and what he is proud of with their work. “Because we never really plan things in a musical way, besides saying we want this record to have this certain feel, or this kind of instrumentation, it makes recording much more interesting. If we went in and wrote songs like a typical band does, I think it would limit us on how we think about things and it would get boring for us also. That’s also what I’m most proud of us for—just doing whatever we want. I think [that freedom] is also definitely what’s held us back as far as popularity, because we’re always kind of experimenting. I think the people that are with us are really with us, which makes it all worthwhile.”

Two decades of such extreme and emotional music is an incredible achievement. Along with the appreciation the duo have for their fans, they’ve also long showcased additional appreciation for their fellow collaborators, including artists such as Lingua Ignota, Moor Mother and Sow Discord. These artists also make an appearance on The Body’s new Remixed record, which collects a range of work throughout the band’s career, handing over the reins to other artists to put them into entirely new contexts.

Such an idea makes for an intriguing approach to highlight The Body’s career to date. As consumers of music, we typically see remixes as a means of entertainment; for The Body, remixes in this case represent a grander idea—a means to reflect on how their community views their work.

“I was just really curious to see what people could come up with,” Buford says of Remixed. “Our music has a lot of elements that are easy to manipulate, so I felt like people could really go in any direction—which they did—and I love it. Our band is also a very communal in the sense we always have lots of people play on the records and the collaborative stuff we do, so it feels natural to hand the reins over completely to other people.”

The Body is a beautiful amalgamation of music. Throughout the pulsating madness of each of their compositions, there is an intimate and unnerving poetry. Tapping into primal feelings, while exuding an ethereal aura, The Body masterfully dive into the human condition of struggle. Yet for all their darkness, for the grim sonic elements, there is a cathartic element that’s restorative. Buford and King not only craft music that challenges their artistry, but music to challenge the listener; not by creating barriers to process, but by presenting a space to feel.

The Body’s career is nothing short of fascinating. Through their experimental songwriting and emotional prowess, it should prove just as exciting to see where they go from here. With 20 years of creating music behind him, Buford looks forward to the art he and King have to share with the world.

“I think we’ll keep doing the same—trying to make interesting records to us and hopefully everyone else,” he says. “I love music so much and also extremely varied music, so I want to kind of take everything I love about all this music and distill it into whatever we do.”