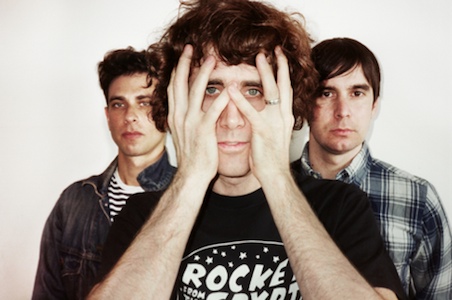 New York dancepunk group The Rapture have broken up. And they didn’t bother letting anybody know about it. Self-Titled reports that Luke Jenner was listed in a press release for Red Bull Music Academy‘s New York festival as being “formerly of The Rapture.”

Jonathan Galkin, label manager of DFA Records, is quoted in the Self-Titled article as saying, “I kept thinking it might blow over, but that might not be the case.”

The Rapture was formed by Luke Jenner and Vito Roccoforte in San Francisco in the late ’90s, and released their abrasive post-punk debut Mirror in 1999 on San Diego’s Gravity Records. The group then added bassist Matt Safer in 2001, when they released the Out of the Races Onto the Tracks EP on Sub Pop. Keyboardist Gabriel Andruzzi joined on 2002, at which point the group dramatically altered their sound with the help of DFA Records producers James Murphy and Tim Goldsworthy, producing their breakthrough 2003 album Echoes and single “House of Jealous Lovers,” which you can listen to below.

Pieces of the People We Love followed in 2006, then a long hiatus and eventually the departure of Safer in 2009. The band’s last album was 2011’s In the Grace of Your Love.