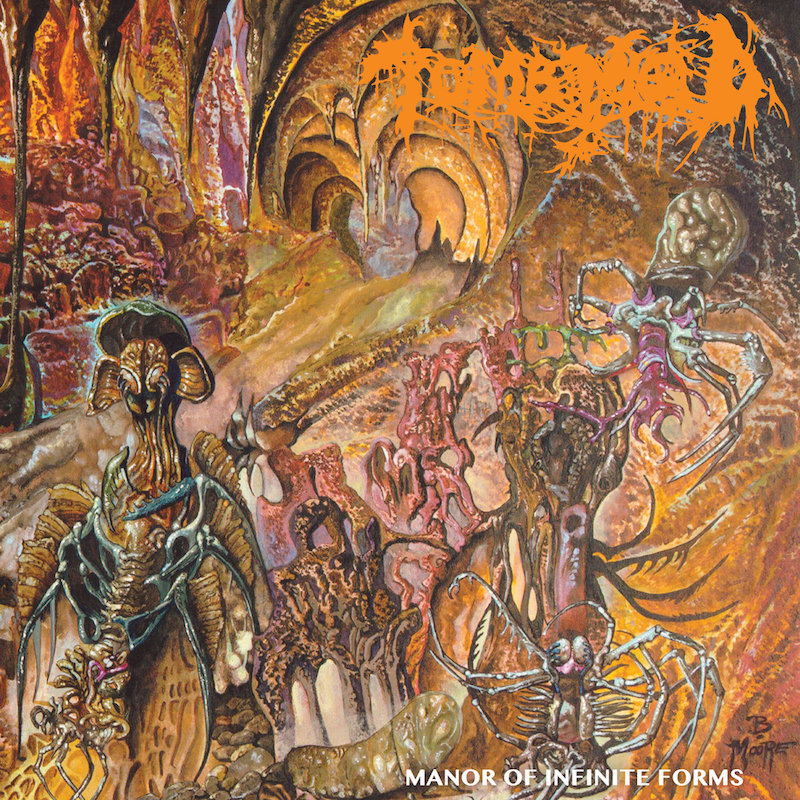 To turn a heavy band into an absolutely crushing one, it never hurts to add more musicians. In 2017, Toronto death metal group Tomb Mold were already pretty beastly, their debut album Primordial Malignity recorded as a duo, with Derrick Vella and Max Klebanoff handling all instrumental duties. And in the process, they unleashed something nasty upon the world, their harsh and piercing sound both punishing and illusory. Metal’s had countless examples of bands whose work was a studio-built creation, and Tomb Mold was an impressive example, especially for a debut album. But with two more musicians added to the fold, allowing the band to take advantage of the chemistry of four people playing the living hell out of their instruments in the same room, Tomb Mold inevitably surpass the potential of their debut. They were a good band before, but with Manor of Infinite Forms, their sound is fully realized.

The majestic riff that opens the leadoff title track is enough evidence that Tomb Mold are onto something even grander and more powerful with their sophomore effort, its twisted melody a sign of intense things to come. But even more than that, it’s an early indication of the melodic sensibility that Tomb Mold harnesses. With the band expanded to a quartet, they unleash a torrent of burly riffs and punishing rhythms that feel richer, more raucous and muscular. But it’s the driving force behind that brawny execution—the band’s epic, expert songwriting—that makes it all worthwhile.

Sometimes it’s all about the superhuman musical feats. At seven minutes 20 seconds, “Blood Mirror” is by no means a brief track, though it’s moving at what feels like a constant sprint, pummeling, scraping and churning until each member of the band’s limbs seemingly collapse from fatigue. If sheer brutality is what the mood calls for, Tomb Mold can provide. But to focus solely on that is to ignore some of the more interesting aspects of their music. They’re not above adding more ornate intricacies to an otherwise ferocious track, like the classical guitar plucking that begins “Two Worlds Become One,” or the dizzying riff escalation on “Chamber of Sacred Ootheca.” Not to mention the group’s penchant for coming up with some pretty excellent titles. As much showmanship as there is to these songs, however, there’s a sense of completeness and of resolution. The mood may be one of mayhem and destruction, but what they build here is magnificent.

It’s tempting to describe Tomb Mold in terms of being part of the recent New Wave of Old-School Death Metal, and there’s definitely a great deal of classic death metal influence running through these tracks, from the buzzsaw distortion of Entombed to the doomy belch of Autopsy. Yet it’s more that Tomb Mold aspects of an aesthetic rather than paying tribute to death metal’s golden age. Death metal has evolved, and Tomb Mold represent where it is now. They’ve done the homework, but they’re hammering death metal into some incredible new shapes.