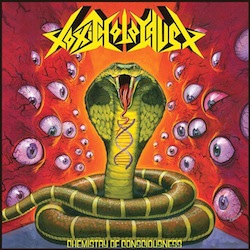 Thrash metal has died and been resurrected at least a few times since the 1980s, depending on who you ask, but it’s never really gone anywhere. In fact, when someone says “thrash is dead,” it usually means that it’s stagnant — still there, active, visible, but neither progressing nor making any great movements. And the genre’s pioneers — the Big Four — are just as culpable for its periods of creative frustration as any of its smaller players. Metallica’s Master of Puppets continues to be regarded by many as the greatest thrash metal album of all time, but if Metallica’s released an album nearly as good as that during your adult lifetime then — no offense — but you’re probably old.

But thrash metal has been in fairly decent shape of late, though, thanks to younger bands with a fresher, more aggressive take. Black Breath and Power Trip are two of the more exciting bands to offer their own spin in recent years, though some bands have been holding a torch for thrash since much earlier in the ‘00s. Portland’s Toxic Holocaust, for example, have been snarling their way through meaty power chord riffs since 1999, and their 2003 debut, Evil Never Dies, is one of a handful of records, along with Municipal Waste’s Waste ‘Em All, to usher in a new class of thrash hopefuls. On the band’s latest, Chemistry of Consciousness, not that much has changed. They’ve gone a little more aggressive, and have a bigger budget to record with, but Toxic Holocaust is still fixated on old-school thrash without much fuss or flourish.

“Awaken the Serpent,” the first track on Chemistry of Consciousness, sets a pace that scarcely lets up. At only 99 seconds long, it makes its point quickly and ferociously, vocalist Joel Grind growling through a punk-edged ripper that quickly transitions into the more Discharge-influenced “Silence.” There’s a slowed-down death-boogie to “Rat Eater,” Motörhead-style metal ‘n’ roll on “Acid Fuzz” and some vicious hardcore menace on “Mkultra.” The amount of diversity here is fairly low, but it’s not terribly relevant. Toxic Holocaust play visceral, simple, impossibly fun thrash metal that doesn’t require much to satisfy. But while Chemistry of Consciousness is certainly good, as long as the band plays it safe, it’s still a fair distance from great.