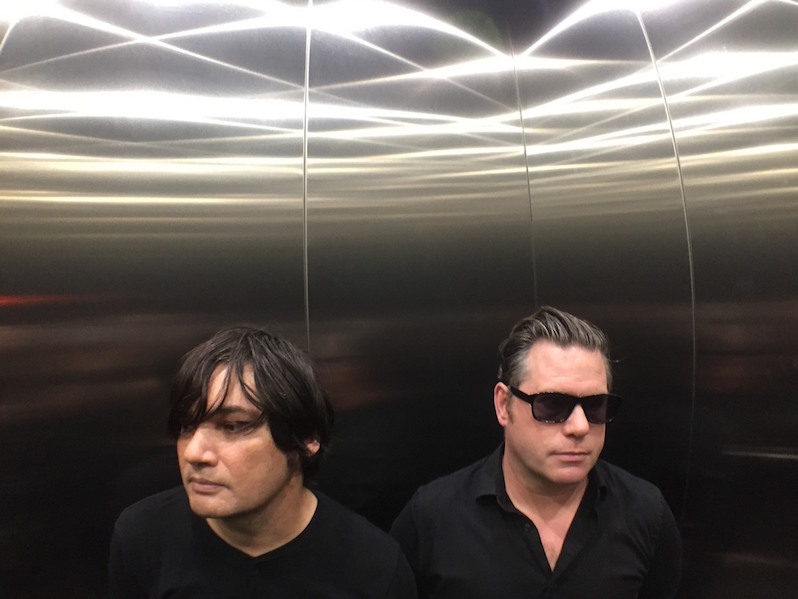 The music of …And You Will Know Us by the Trail of Dead has swung from blistering punk to ornate progressive rock and back over the course of their more than two decades together. Early on, the Austin group built a reputation for being an intense live act, one whose shows often ended in reckless, giddy destruction. But over time they’ve built on that foundation and explored more intricate and nuanced approaches, constantly evolving throughout their career, but always with a kernel of the incendiary spirit from which they were born.

Earlier this year, Trail of Dead released X: The Godless Void and Other Stories, their tenth album, which arrives just after their 25th anniversary as a band. Their body of work has grown large enough that it eclipses that of their influences and early peers, like Fugazi or Unwound, so we had a chat with founding member, vocalist/songwriter and drummer Jason Reece about 10 of his favorite …And You Will Know Us by the Trail of Dead songs.

“Heart of the Hand in the Matter”

Jason Reece: It’s sort of about a love affair in a dystopic society. One of the lyrics, it’s silly but it seems kind of relevant in one way, is “ride the apocalypse.” It’s the opening lyric. At the time we were reading Philip K. Dick books and watching Wong Kar Wai movies. One movie I watched was called Fallen Angels, it’s kind of about a hitwoman. She’s out there in this Blade Runner-esque world, but it’s also a love story, too, so yeah.

Treble: The song seems to encapsulate two different sides of what the band does well—the aggressive intense punk side, but it also has a bigger arrangement. It’s a very rich-sounding song.

Yeah, I mean, it’s one of those songs that are kind of like, ambitious in the way it was created, and I don’t know if we got where we were trying to reach for, but we’re sort of shooting for the most bombastic, epic sort of love song we could think of at the time.

“Strange News from Another Planet”

JR: It’s kind of a crazy, progressive—I’m gonna say 17-minute song, with peaks and valleys, and definitely one of those songs we kind of love playing live. It has this journey that you’re taking. We kind of like the idea of taking a journey to somewhere—a road trip or somehow leaving your home and going and finding something at the end of this journey. So “Strange News” is kind of typical of that, but the most I guess, grandiose. I guess we figured, we’ve never written a piece that long, and it can be considered pretentious. But we were like, “We don’t care, let’s just do it.”

“Weight of the Sun”

JR: It’s one of the shorter songs we’ve written. It’s around two minutes and thirty seconds. It’s got this intense energy, but at the same time the lyricism is more fantastical, or more about the mythical. More about Prometheus and the idea of knowledge—the knowledge that you’ve taken, the knowledge of the gods, so you have to pay for it in some way or another.

JR: We played this on the live tour we got to do before the pandemic happened. It’s a little off the beaten path for us. It’s a little more of a pop feeling song. It’s definitely has this positive, very upbeat sound, but the lyricism is about loss and about moving from a place where you have roots and your roots are—you’re attached to one place but you have to move because you know it’s for the best, so you experience a certain sense of loss. It’s kind of an interesting juxtaposition of this happiness within the music, and then this sort of sadness within the lyrics. It’s the Trail of Dead version of pop.

“Into the Godless Void”

JR: We tend to have long titles. We like to overdo everything. That song is definitely…it’s riffy. It’s heavy. I’m screaming a lot on it. The lyrics to me, well, the best way I can sort out what is coming out of my brain is I was reading an article titled ‘The American Void’ and it’s about how America is pretty much dining on junk food culture and video games and our president is the reflection of this culture. Basically when you have people coming out of it and becoming mass killers—it’s also kind of referring to Dylan Roof—and how he’s this lost kid that found all this hate on the internet. It’s just kind of garbage in, garbage out, it affected me in a sense. I’m not necessarily trying to make a political statement, it’s just a reflection of where we’re at right now, the state of America. So yeah, that’s definitely what came to me as an inspiration to write something dark but hopeful, I guess. Maybe we can evolve from where we’re at right now? There’s also this underlying optimism in the song. It’s not all doom and gloom, I guess. There’s a lot going on…I’m really just trying to create a picture and reflect. It’s something that’s in the way I write.

From …And You Will Know Us By the Trail of Dead (1998; Trance Syndicate)

JR: The way we approached everything when we started as a band, if we thought something was maybe fucked up about a club we were playing, or things didn’t go the way we wanted them to, we’d just destroy and trash everything. This song is kind of the manifesto of the band at the moment, even though we didn’t have a real manifesto or anything. But it was like: fuck everything, fuck the police, fuck club owners that rip us off, fuck the government. (Laughs)

Treble: And it’s a song that’s been in your live setlists for 20 years.

JR: It’s always a live song that brings people together to dance a bit, so there’s that energy there, that we can still play that song even if it’s 25 years old or whatever. It still has this punk rock energy that we still subscribe to in a lot of ways. It’s what we grew up with. As much as we have other interests, that energy is something that you can’t get rid of when you’re submerged in that, with the beginnings of the band. That’s the environment you came out of, playing DIY spots, touring in bands, barely making it.

JR: Another riffier song that we’ve written and has a lot of upbeat energy. There’s sort of a triumphant energy to it. Kind of like a song that’s more about rising above your circumstances and doing what you can to get through and…in a lot of ways it’s as simplistic as a call to arms. Protest in the streets. Something that has a very put-your-fist-up-in-the-air sort of vibe. We’re not Rage Against the Machine or Fugazi or Public Enemy, but that vibe is something that we always love, so you can probably see the influences of the ‘90s Dischord hardcore sound.

“How Near How Far”

JR: As a live song, it seems to kind of really move people. People really seem to gravitate toward that song. Playing it live is nice, because there’s a sense of joy in it. It doesn’t feel like you’re just going through the motions. I’m trying to look at Conrad’s lyrics and thinking of it as a romantic struggle, but more of a Trail of Dead attempt to look at things in a mythical way. Old things as well as new things. I knew the song was inspired by a Max Parrish painting. We tend to like the grandiose old world as well as whatever’s happening now. Conrad’s always been really into more fantastical imagery. He loves books like Dune, and he’s always been into sci-fi and fantasy, and that’s been in our artwork too. That makes us a little odd, I guess.

“Children of the Sky”

JR: There’s a sadness in this very, I’m not going to say sentimental, but it has a sort of heart-wrenching beginning to the music, to the opening, and then it kind of transcends and there’s so much tension and buildup. I’m going to say it’s so typical of us to do, but we were inspired by bands like The Who, who have this crescendos and these epic moments like in Tommy, certain moments. That’s our little mini Tommy. Or maybe, more like A Quick One. Something where it’s…let me start over. Maybe “An Amazing Journey.” So The Who is an influence on the band, the bombastic drumming. I grew up listening to The Who, and Keith Moon was one of the reasons why I started drumming, but yeah, lyrically it’s a song about loss. The loss of a friend. So there’s this personal aspect to the music too.

“Will You Smile Again For Me?”

JR: That one seems to be, when we play live, that really seems to reach people. When we were writing it, it was one of the harder songs we ever worked on, because at the time we were struggling with making it, I guess, precise, when we’re not that type of band. So it took us a while to realize it wasn’t going to be a precise, perfect, in-time kind of song, and the emotions would have to come through, and it’s not about the technical prowess of the band and more the visceral elements of the band coming out. And it seems to me, lyrically, it’s about depression and when the world’s got you down, is there a sort of “is the sun going to come out after the rain?” kind of thing.

People probably have different interpretations of it, who care about the lyrical elements, maybe some people just like the riffage, but people gravitate toward it. It’s been used in TV shows, and it’s one people seem to relate to the most with this band. So I’m going to say that’s one of the number ones of the band.

Treble: It has a kind of parallel between the musical content and the emotional journey, the tension and the release.

JR: I feel like that’s where we started finding our personality more and our sound, and interesting things about yourself. Writing and – it was a challenge to make that song and once we met that challenge, we finally put it out there into the world and when we were playing it live it felt so natural. Before…it was this huge mountain in front of us, and it was like “we have to fuckin’ climb this thing.” I’m sure every band who’s making an album has a song like that. And then it becomes one of your more well-known and well-liked songs so there’s something satisfactory about that. It’s the emotional plateau—the ups and downs of that song are characteristic of our band in a lot of ways.