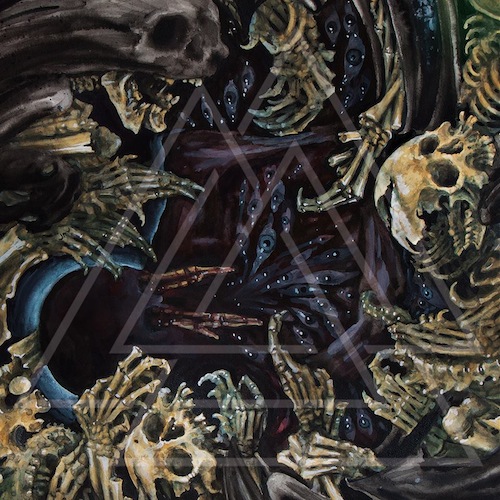 Twilight‘s III: Beneath Trident’s Tomb begins with several seconds of incomprehensible whirrs and shrieks, ostensibly born of the band giving life to all of their electronic equipment. It’s almost as if Twilight were completely caught off guard, unaware of the album before them. That feeling doesn’t necessarily go away upon hearing the rest of album opener “Lungs,” either: Jef Whitehead lays down a fairly traditional tribal beat while the band’s numerous axe-wielders (including the addition of Sonic Youth’s Thurston Moore) lend progressions and, well, noise to the proceedings for a few minutes. The tempo stays fairly mid-level and there aren’t really any surprises. The vocals are loud and rife with screaming, but nothing outside of the song’s opening seconds sounds remotely dangerous. It would be easy to picture the band humming along while giving each other worried looks as to when to actually end the damn thing.

While that may sound a bit harsh, the band’s individual parts have proven that they are capable of much more in the past. Sporting a sort of who’s-who in a certain scene of American metal and beyond, Twilight has been an outlet for some of that underground’s most celebrated musicians. While the band currently (well, during the recording of this release, anyway) plays host to members hailing from Krieg, Minsk, The Atlas Moth, and the aforementioned Sonic Youth, III: Beneath Trident’s Tomb rarely takes advantage of their talents. Thurston Moore casts a huge shadow over the record’s proceedings, bringing Sonic Youth’s propensity for pure, unadulterated noise to the forefront, but this only helps the record every once in a while. On the closest thing that the album has to a one-two punch, “Oh, Wretched Son” and “Swarming Funeral Mass,” the noise lends ferocity and aggression on the former and a nice dose of atmosphere on the latter. Elsewhere, like on the insufferable mess of a closer that is “Below Lights,” it’s used as a crutch to mask poor and shockingly amateurish songwriting.

That being said, III: Beneath Trident’s Tomb is not a terrible album — it just feels like a massive missed opportunity. The six songs on here, while varying in degrees of quality, are of a sinisterly singular mood. Unlike the group’s past works, III never relents on the opaque misery. Sprinkled throughout are lead pipe wind chimes and buzzing synths to drop you down Twilight’s seemingly endless sonic hell. Rather than employ acoustic passages as the band has done in the past, Trident’s Tomb utilizes some rather mesmerizing industrial and drone passages — particularly in the album’s midsection — to keep things moving along at a surprisingly soothing pace. It’s an easy album to listen to as background noise, begging for the repeat button to be hit in the hopes of someone discovering its secrets and nuances.

But, in a genre that has delivered as strongly as Black Metal has in recent years, is that necessarily a good thing? III: Beneath Trident’s Tomb is a perfectly competent piece of industrial black metal, but it’s not pushing any boundaries. It may make a decent footnote in the numerous musicians’ Wikipedia entries, but it will inevitably be forgotten. Given the assembled cast and that III is supposedly their last tango together, that’s a damn shame.