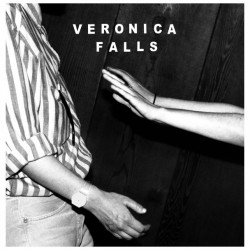 Turning 20 is both an exhilarating experience and a terrifying milestone. Like any birthday, most of its significance (or lack thereof) boils down to your subjective understanding and what you make of it. For some, 20 is just another year closer to the long-anticipated 21, an irksome stopgap between adolescence and alcoholic bliss. However, its objective meaning is impossible to ignore: though common law regards a person as an adult once they turn 18, the real psychological shift — the personal understanding that you are an adult — occurs at 20. Again, what this means to each individual will vary, but a thoughtful person would hard-pressed to claim that they aren’t the least bit scared, timid, or uncertain on the eve of their impending adult life. For this author, who is, himself, rapidly approaching this daunting age, the mixture of feelings that the transition into adulthood prompts is a truly diverse cocktail. Maybe that is why I’m stricken so strongly by Veronica Falls’ sophomore album, Waiting for Something To Happen, which deals quite poignantly with this liminal period of young adulthood. Or maybe it’s just one of the better albums I’ve heard this year.

The title of the album, appropriately, gives a good, primary indication of what this album is about, evoking the vague and anxious doldrums of the late teens/early 20s. This sense of “teenage wasteland,” or the pensive existence that accompanies the culmination of maturity, permeates the album; due to this, Waiting For Something to Happen bears no small influence from ’80s alternative artists such as The Replacements (especially their 1984 album Let it Be) and Hüsker Dü. Needless to say, these sensibilities distinguish WFSTH from Veronica Falls’ excellent self-titled debut. That’s not the only difference here, though. In fact, this album is far different than Veronica Falls, from top to bottom.

The subject matter (already touched on briefly) has moved on from the gothic and macabre elocution that earned them the descriptor of “goth pop” in 2011. Now, instead of songs like “Found Love In A Graveyard” and “Beachy Head” — which features singer Roxanne Clifford delivering the lines “White cliffs coming to a raging sea / Riptide’s gonna push the life of me / I’m gonna miss you / When you’re gone” — Veronica Falls is writing tracks such as “Teenage” and “Everybody’s Changing” from a more earnest, autobiographical standpoint. For example, contrast the above sampling from “Beachy Head” with the chorus of “Teenage”: “Driving late at night / I let you listen to the music you like / Then I’ll drop you home.” These direct, sentimental lyrics may, on paper, seem to belie the interests that Veronica Falls displayed on their last album, but there is no mistaking the sincerity in their music. These emotions are for real, guys. And Veronica Falls is better off for it. Again, their debut album was extraordinary, but the expressive beauty of Waiting For Something To Happen shows that Veronica Falls handles the complexities of life and human interaction much better than death.

The musical channels that they utilize to express themselves are better here, too: gone are the post-punk angularity and overwhelming Pixies influence of Veronica Falls; instead, VF takes cues here from the ’80s and ’60s, incorporating jangle pop elements reminiscent of R.E.M., such as clean, dual-guitar interplay, and pitch-perfect vocal harmonies (the impeccability of which echo The Beach Boys and The Zombies). Luckily, their technical chops have sharpened with their songwriting skill, which, along with actually being able to record in a studio, allows them to execute their harmony and counterpoint deftly. Hell, the euphony here is so strong that you couldn’t really even call this a “noise pop” record (a classification which some deemed Veronica Falls to fit into); indeed, the only spot of dissonance on the album comes in the brief guitar squealing at the onset of “My Heart Beats.”

This shift in priorities doesn’t benefit every aspect of the music, however. As a percussion enthusiast, I must point out to my comrades that the drumming here has taken a much less dynamic approach. While the rhythm sections on WFSTH still maintain Veronica Falls’ signature drive, the busy (in a good way) and engaging drums of Patrick Doyle have been marginalized and simplified to allow the fantastic male-female vocal harmonies to take center stage. I would normally find this shift into more standard “pop drumming” lamentable, but the fact that it actually works for these songs lessens the sting of what is probably the main fault in the album.

The moral of the story, here, is that Veronica Falls have matured into a unstoppable indie rock force. After releasing two excellent records in two years, and demonstrating a bent toward artistic progression, VF have situated themselves as champions of contemporary pop music and emerged as one of the better new artists in a definitely oversaturated “indie pop” (whatever that means) scene. For that reason, I must take issue with Clifford’s melancholic, concluding line on the album: “There’s no hope for me.” On the contrary, I happen to believe that there is a lot more to hope for from Veronica Falls, and I hope that both they — and I — continue to succeed and grow with grace as they get older. Cliché or not, there are endless possibilities.

The Replacements – Let It Be

Video: Veronica Falls – “Waiting For Something to Happen”