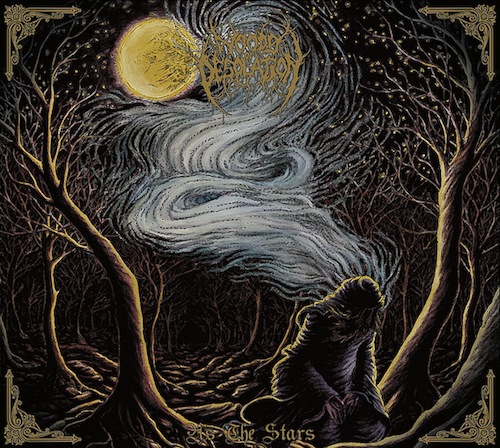 Black metal and shoegaze are complementary by nature. You might not think so, given the ethereal nature of the latter, and the harshness of the former, but at the heart of it all, there’s more in common between the two seemingly disparate styles than advocates of either might let on. Both can be extremely loud, for starters, and both are created out of layered, dense sounds, made predominantly from distorted guitars. You’ll forgive me if it sounds like I’m dumbing this down to the point of being insulting, but considering the sometimes knee-jerk reaction of curmudgeonly traditionalists to artists that bridge the gap between the two — like Wolves in the Throne Room, Alcest or Deafheaven — you’d think someone was putting blast beats behind ukuleles and glockenspiels (note: Whoever is thinking of doing this, please don’t do this).

Woods of Desolation — the project of solitary (though often collaborative) Australian musician D — display with the utmost transparency the likenesses between shoegaze and black metal on new album As the Stars. I say “transparency” because, unlike many of the most prominent and regarded blackgaze musicians (like the ones mentioned above), Woods of Desolation combine the two in a pretty straightforward manner, mashing them up while remaining as traditional as possible to each. That probably sounds contradictory — the very act of intertwining characteristics of genre means that neither is pure, so to speak, but As the Stars is about as traditional as blackgaze gets.

In fact, As the Stars is easily one of the catchiest blends of black metal and shoegaze to be released in quite some time — maybe ever. While it may not display the sheer ambition of an album like Sunbather or Celestial Lineage, it’s a lot of fun to listen to, and shows more than anything that Dis equipped with some impressive melodic skills. The massive rush of chords that comes flooding through opening track “Like Falling Leaves” is at once intense and serene, pushing and pulling between seemingly contradictory ideas of beauty and menace. Yet the considerably slower and more majestic “Unfold” has much less in common with black metal than Slowdive or Alcest’s recent Shelter, only with its blackened, hissing vocals giving the unmistakable indication that Woods of Desolation is, indeed, a metal band. Yet it’s toward the center of the record where standout tracks “This Autumn Light” and instrumental “Anamnesis” most strongly show off the group’s hook-laden sensibility.

On As the Stars, Woods of Desolation aren’t reinventing either black metal or shoegaze, but they combine them in a manner that makes for a good listen either way. D understands melody and song structure better than a lot of black metal’s underground dwellers, and more importantly, isn’t afraid to commit to a crisp, high-fidelity recording to capture those strengths. As the Stars is endlessly listenable and sounds great — sometimes those are the best qualities an album can have.