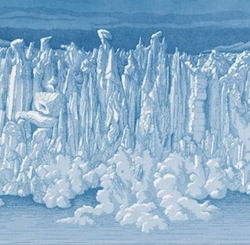 Metalheads have been fighting back against the perceived threat of genre gentrification on the part of indie rockers for some time now. It’s perfectly justifiable — nobody wants their local neighborhood’s color removed only to make room for a Starbucks. But as time goes on, the more it seems that the metal and indie rock communities are becoming perfectly comfortable with one another. Kylesa has been touring with White Hills. KEN Mode played Pitchfork Fest. And with the direction Baroness recently took on Yellow and Green, it wouldn’t come as a shock if they aligned themselves with Sub Pop or Matador sometime soon.

Venerable Chicago label Thrill Jockey that taken some recent steps to build up its metal cred. In 2011, the label released New York black metal transcendentalists Liturgy’s second album Aesthethica, and not long after, brought Mike Scheidt, frontman of doom metal titans YOB, on board. Earlier this year, Thrill Jockey also announced the addition of apocalyptic doom duo The Body to their roster, and rounding out the heavy end of the label is Wrekmeister Harmonies, a long-running drone project of JR Robinson, which has also been known to feature a good many other luminaries of the metal scene. And new 12-inch release You’ve Always Meant So Much To Me, while certainly powerful in its own way, has an ambient approach that makes it less of a curious match on a roster filled with post-rock, punk and electronic names.

You’ve Always Meant So Much To Me is just a single 38-minute track, which unfolds slowly and builds from a faint hum on up to something even more haunting and dense. Written for a film and performed last year at the Museum of Contemporary Art Chicago, most of the lengthy piece has an elegant, anguished approach that puts it more in line with the likes of Godspeed You! Black Emperor or dark ambient artists than anything explicitly metal. And yet, it contains contributions from the likes of Leviathan’s Jef Whitehead, Yakuza’s Bruce Lamont and Nachtmystium’s Sanford Parker. So, that means it’s still kind of metal, right?

Indeed, it certainly helps, but while the 22-minute build-up of strings and feedback give the impression that there’s no crushing doom to be heard here, the next 16 minutes make up for that by exploding into a massive rush of distortion and wordless bellows. The low end rumbles and the volume peaks, and You’ve Always Meant So Much to Me becomes a destroyer of worlds rather than a source of subtle terror. And yet there’s still so much beauty and grace in its massive, fearful onslaught. There are layers of emotion within You’ve Always Meant So Much to Me, which are powerful beyond easy definition or recognition. Musically, as well, it’s music that’s hard to pin down — it belongs, in part, in the world of metal, yet it doesn’t fully commit to it in any concrete way. That it’s so indefinable is its second most appealing quality; that it’s so achingly gorgeous is its first.

Wrekmeister Harmonies : We Love To Look At the Carnage