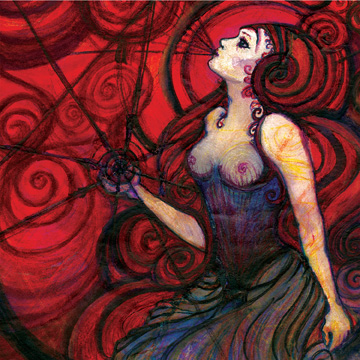 From the most mainstream pop to the most truculent grind, one of the first lessons that any successful artist learns in the gladiatorial arena of popular culture is that, when you’re performing well, you’re well-nigh untouchable. Outside of the legal system, society allows successful musicians a huge deal of behavioral leeway and even privileges them, to a certain extent, as sanctioned rule-breakers because of their status as producers of music. However, the flipside of that objectification effectively dictates that an artist is only as worthwhile as his latest album. This double-edged sword is obviously a powerful tool: powerful enough, in the case of My Beautiful Dark Twisted Fantasy, to annihilate the critical mass of bad will sustained by Kanye after his tantrum at the VMAs. But when that sword falls back on you, it can be equally debilitating. After falling on hard times (drug withdrawals, an arrest) and disbanding Nachtmystium in the wake of 2012’s underrated Silencing Machine, Blake Judd really needed to a triumphant stroke upon his return to win back an alienated fanbase and retain a vanguard position in the black metal scene. Instead, Nachtmystium has released The World We Left Behind, an aptly-titled miscalculation that promises only to inflame the band’s preexisting issues.

The intro “Intrusion” is pretty standard fare, offering no surprises other than the very hi-fi production – an aspect of the album that dominates increasingly, and to its detriment, as it goes along. The dark, energetic swelling of the intro gives way, rather jarringly, to “Fireheart,” which – bearing a dance beat and Judd’s best Wolverine Blues impression – does indeed come off as a surprise. Nachtmystium is not Kvelertak, however, and the awkwardness of this attempt at more mainstream metal is apparent in the song’s absence of intriguing guitar work and Judd’s overuse of the chorus. While placing “Fireheart” at the onset of the album foregrounds the band’s inclination to experiment and challenges their fans, it also shifts the mood of the album so drastically that the pointlessness of the already-vestigial introduction becomes exaggerated.

The following track “Voyager” returns to more familiar territory, plundering noticeably from Death’s Symbolic in order to relate Judd’s histrionic, autobiographical frustrations (e.g.: “This never-ending journey is a constant maze”). Again, it’s not a bad impulse for Judd to work in a more diverse emotional palatte to Nachtmystium’s sound, especially since he’s addressing real life struggles. However, that positive impulse backfires when it is realized in clichéd, simplistic, ABAB lyricism. This problem (painfully palpable at some moments) is compounded by the glossy production to provide an overriding sense of pro forma artifice for what is arguably the most sincere music of Judd’s career.

Not everything here is bad, not by any means. The band seems to click periodically throughout the album, such as in the searing opening minutes of “Into the Endless Abyss” and the vitriolic badassery of “Tear You Down.” However, by the time that The World We Left Behind reaches its ridiculous, Pink Floyd-aping closer “Epitaph For a Dying Star,” it has given true form – in its schizophrenic attempt to be both a mainstream breakthrough and an ameliorative, personal record — to the nightmares of all those reactionaries who prophesied Sunbather to be black metal’s London Calling. As the album’s title indicates, Nachtmystium has indeed left behind a world; now it remains to be seen how long they’ll survive in their new one.

Goatwhore – Constricting Rage of the Merciless

Nachtmystium announce final album, The World We Left Behind