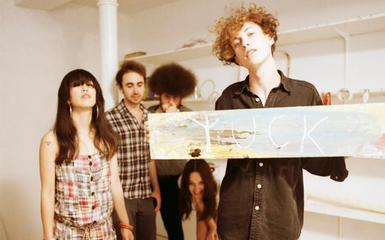 Seriously short concert reviews for serious concertgoers, our new column “10% for the 10%” takes on a band’s live experience in ten categories, each representing 10 percent of a possible 100 percent score, in 140-character, Twitter-friendly reviews. For our first installment of this brand new column, we give the rundown on UK indie rockers Yuck, and what fans can expect from their live show.

Audience: Venue was packed from wall to wall with a friendly bunch that knew every word to a Feb. 2011 release. No fights. Tons of sweat and smiles.
10 of 10%

Sound Quality: Chose a venue that more than handled their roaring overdose of pedalpower. I think the crowd understood Blumburg’s lyrics better in person.
8 of 10%

Opening Act: Solo effort Porcelain Raft’s pedal mastery and falsetto were out of this world, but the short set from the lone opener ended too abruptly.
6 of 10%

Set Up: 2 rows: drums and amps in back, mics, pedals and guitarists in front. Spacing was adequate, so that all members were seen throughout venue.
8 of 10%

Set list: 11 songs from LP and demos sounded spot-on to the recordings, but that’s quite alright when your efforts are known for being lo-fi.
9 of 10

Showmanship: Front line didn’t venture far from their pedals, but you felt their passion anyway. Besides, Rogoff packs enough energy for the lot of em.
7 of 10%

Crowd Interaction: Yuck don’t small talk much, but their nonchallant shmoozing with the crowd before and after their set more than made amends.
7 of 10%

Shirts, Merch and Sales: Offered an expanded re-release of their acclaimed debut in CD and vinyl, and Yuck didn’t push too hard to sell.
7 of 10%

Meets Expectations of Hype: Brilliantly executing their set and hanging with the crowd post-show, the crowd still could have played a few more tracks, perhaps a cover.
8 of 10%

Yuck have broken up