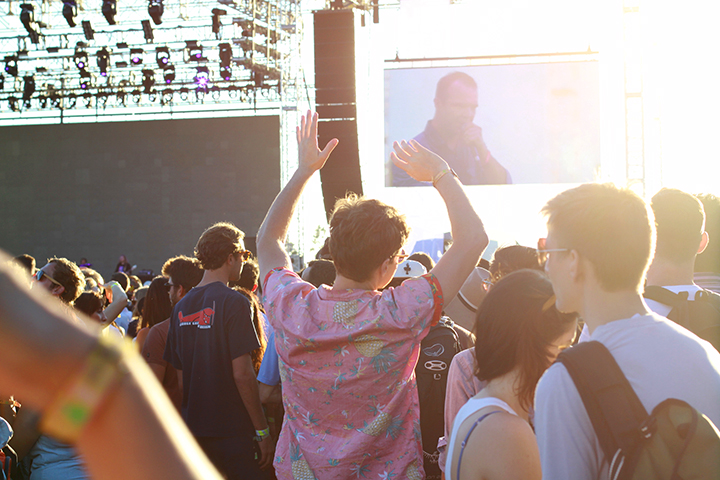 Los Angeles’ FYF Fest has come a long way since founder Sean Carlson’s first single-day, single-stage gathering of punk bands. In its eleventh year, FYF has grown into a massive spectacle, one still a distance from being the size of Coachella, yet has that desert blowout well within its sights. Having moved to Exposition Park — home to USC sporting events — after having been at the Downtown Historic Park the last couple years, the upgrade brings with it both good and bad. The facility is much prettier, with a lot more green surrounding the stages, rather than a dusty field. And the use of the indoor arena this time allows for something that past year’s FYF Fests couldn’t provide — air conditioning.

There are some more inconveniences to be found at this new venue, which is inevitable when you sacrifice one location for another. For one, the stages are much farther apart, and the avenues through which to walk to them much narrower, making bottlenecking a more frequent risk, and increasing the difficulty in being able to see as much. And the arena — which is still pretty cool, all things being equal — fills to capacity faster than you’d think, making it much harder to go in and out of it in order to see what’s happening inside. More than a few fans expressed their disappointment at not being able to go inside to catch Todd Terje for instance.

With festivals, though, you take the good with the bad, and what we saw at FYF Fest 2014 was definitely more good than bad.

A 4 p.m. slot seemed entirely too early for a band as moody and iconic as post-hardcore legends Slint, but the discoball-lined cosmic vibes of the arena at least put some mystique back where a hot, sweaty outdoor afternoon might have sucked it out. The group wasn’t particularly chatty, looking a bit distant onstage as they put themselves entirely into the technical, yet beautiful music they played. Theirs is a quiet intensity, though — mostly. The music — which was heavy on Spiderland highlights like the graceful “Breadcrumb Trail” and the jagged “Nosferatu Man” — broods, rather than throttles or abrades. It sounded immaculate, even when the dynamics onstage didn’t quite extend beyond precision and professionalism. But if you just sat back, closed your eyes and let it soak in, it was truly something to behold. – JT

Real Estate are chill dudes with a chill sound, and while that might not at first seem like a match made in heaven for a festival audience, their gentle wash of guitar jangle really hit the spot just when the afternoon sun was starting to feel slightly less oppressive than it had earlier in the day. Guitarists Matt Mondanile and Martin Courtney — who look almost identical at times — have engineered a guitar sound so pleasing to the ear that it’s impossible not to be a little enchanted by it. Pulling mostly from their last two albums, Days and Atlas, the New Jersey-based group proved to be fun and charming without being overbearing, treating the crowd to highlights like “It’s Real,” “Green Aisles,” “Had to Hear” and “Crime.”  Sometimes, a perfectly pleasant performance is what you need before diving into the more intense stuff. – JT

So — the more intense stuff, then. I’m not sure if there’s a more charismatic frontman in indie rock right now than Sam Herring. Hell, I don’t know if there’s a more charismatic frontman in popular music right now than Herring. He’s built up a reputation over the last few years of giving himself fully to his performances, revealing himself as an intense and physical lead singer rather than a cool and detached one. And detachment might work for some, but Herring’s a lot more fun to watch. He whips his arms, bites his hand, dances like a man on a serious mission, and generally gives the feeling that he was born to do what he does. Future Islands on the whole is fantastic live, of course, and here they delivered plenty of synth-driven wonder via a set of songs equally distributed between their last three albums, including On the Water‘s “Balance” and Singles‘ Letterman-propelled single, “Seasons (Waiting on You)”. But it still mostly comes back to Herring; when he started swiveling his hips all sexy and seductive like, during “Doves,” he reiterated with his gyrations just how much more advanced he is as a showman than most — no props or lasers needed. – JT

“You gotta work really hard, and you gotta be dedicated,” El-P declared. The New York hip-hop vet was holding court on the Trees stage alongside his Run the Jewels cohort, Killer Mike—the two of them the very model of hard-won success. High fiving between verses, they stalked the stage and goaded the crowd to put up the duo’s trademark, stick-’em-up hand signal. El-P rapped his ass off, riding on futuristic dystopian beats while looking like a Miami mob soldier in his tinted aviators and dark jean jacket. “We’re the best tag-team on motherfucking Earth,” Mike bellowed, before launching into a bruising take on his banger “Big Beast” from 2012’s R.A.P. Music.

Along with gnarly rhymes came inspirational messages. Before launching into “36” Chain,” El-P told the crowd to go out to the nearest pawn shop and pick up an invisible, 36-inch gold chain—a totem of inner strength that will ward off all doubters and haters. Later, the duo dedicated “A Christmas Fucking Miracle” to Michael Brown—the unarmed teenager recently shot to death by a police officer in Ferguson, Mo.—along with the people in Ferguson who’ve been demonstrating in the streets against police brutality and institutionalized racism. In recent days, Killer Mike has spoken out on multiple occasions about Brown’s killing; needless to say, the song’s distorted tones and moody beat weighed heavy on the chest. —PH

The hipster horde that had gathered outside FYF’s Arena stage—located inside the Los Angeles Memorial Sports Arena—buzzed with cult-like anticipation. Young people in Hawaiian button-ups and sheer blouses, fitted caps and colorful sunglasses, were all mashed together at the front doors, everyone seemingly desperate to get in. Once I gained passage inside, I realized what all the fuss was about: This place was a dance palace. An arrangement of glittering disco balls hung from the ceiling. Beams of light crisscrossed through the darkened room, playing against smoke from the stage. When Caribou’s Dan Snaith and his backing band finally set out with their sleek, polyrhythmic grooves, the vibe was almost magical.

But this was no “EDM” rave: Revelers certainly screamed with glee when Caribou played songs off their hit 2010 album Swim, but for the most part this dance music was exquisitely subdued, seemingly more in line with the compositional works of Philip Glass or Steve Reich than the summer blowouts of Calvin Harris. For extended periods, the band stretched out with insistent cowbells and syncopated toms, adding minimalist synth lines for a touch of melody, immersive bass for lots of body, and snare-drum hits for new layers of tension. Unfortunately, I had a  hard time getting fully immersed—some people in the audience were just too damn chatty. But I still found time to dance contentedly by myself. – PH

For nearly 20 years, Tokyo trio Boris has found one new way to confound expectations after another, starting off(!) by releasing a single-track drone album, transitioning into more accessible stoner metal, then incorporating elements of noise, hardcore, psychedelic rock and eventually pop, before returning to a heavy, yet hook-driven rock ‘n’ roll on latest album Noise. The group’s history, versatility and reliable fog machines make them a natural fit for a festival like this, and a few sound blips aside (which weren’t their fault), they didn’t disappoint. The sheer physicality of the distorted tone coming out of their amps is an impressive enough thing to behold on its own, thumping the audience right in the thorax and vibrating throughout the ribcage. But they brought some honest-to-goodness jams with them, from newer tracks “Melody” and “Quicksilver” to classics like “Pink,” and ultimately, a noisy drone-out close with “Amplifier Worship,” complete with Atsuo bashing away at a gong. That’s how you play a rock show — loud, fast, intense, and with a huge fucking gong. – JT

The last time I saw Grimes perform, it was at San Diego’s tiny Soda Bar in early 2012. Mastermind Claire Boucher had just released her breakthrough album, Visions, and if I remember correctly, there were probably about 150 people in the room by the time she went onstage. It’s crazy how much things can change in such a short period of time. On Saturday night, this elfin electro-pop songwriter performed to an audience of thousands. Festivalgoers flocked en masse to see her, drawn to the Lawn Stage with a similar kind of Pied Piper hypnotism that I’d witnessed from fans eager to see MGMT—one of FYF’s headliners—last year.

Grimes’ show was that much greater thanks to her two backup dancersand a dazzling lightshow. But in some ways, she was still the same charismatic performer I’d seen at Soda Bar over two years ago, embarking on a fun, exploratory escapade while at the same time demystifying the live show experience. In between her airy, melodic coos on Saturday night, Boucher offered the occasional mid-song asideor sound tech request. And rather than hire a full backing band, her only accompaniment seemed to be a guy in a wizard coat playing electronic drums, who wasn’t even on for the whole set. Indeed, she had the music completely under control, thanks to a trusty array of keyboards and electronics. – PH

You could pick apart the various elements of what makes Phoenix’s live show — bright lights, screen animations, denser versions of their studio material, some sparse but earnest banter — and it might not seem like anything particularly special. But taken together, you have the makings of what’s easily one of the most dynamic alternative rock bands today. A few years back, the French rockers headlined Coachella, and at the time, it seemed sort of underwhelming. After all, Prince headlined Coachella once. But Phoenix has earned it. They play the hell out of their songs, they’ve got an arsenal of hook-laden favorites — some of them actual, honest-to-god hits — and they don’t for a minute half-ass anything. It’s that kind of dedication and hard work that basically makes the group the kind of band that, while continuing to boast its share of indie appeal, can play to a crowd of 10,000 or more and not seem out of place. With just a flip of his microphone, singer Thomas Mars let the audience prove that they know all the words to “Lisztomania,” and based on the wiggling and writhing of so many in attendance, old favorites (and two of their best songs, if you ask me) “Too Young” and “If I Ever Feel Better” haven’t lost any of their freshness after 14 years. And though “Entertainment” from last year’s Bankrupt! didn’t initially seem to me like a knockout single, hearing the band open their set with it has changed my mind. But let’s be real here — it just doesn’t seem in Phoenix to underwhelm either in the studio or onstage. And after building up their catalog and chops over an extended period of time, it’s gratifying to see a band this good achieve the level of success they have. – JT