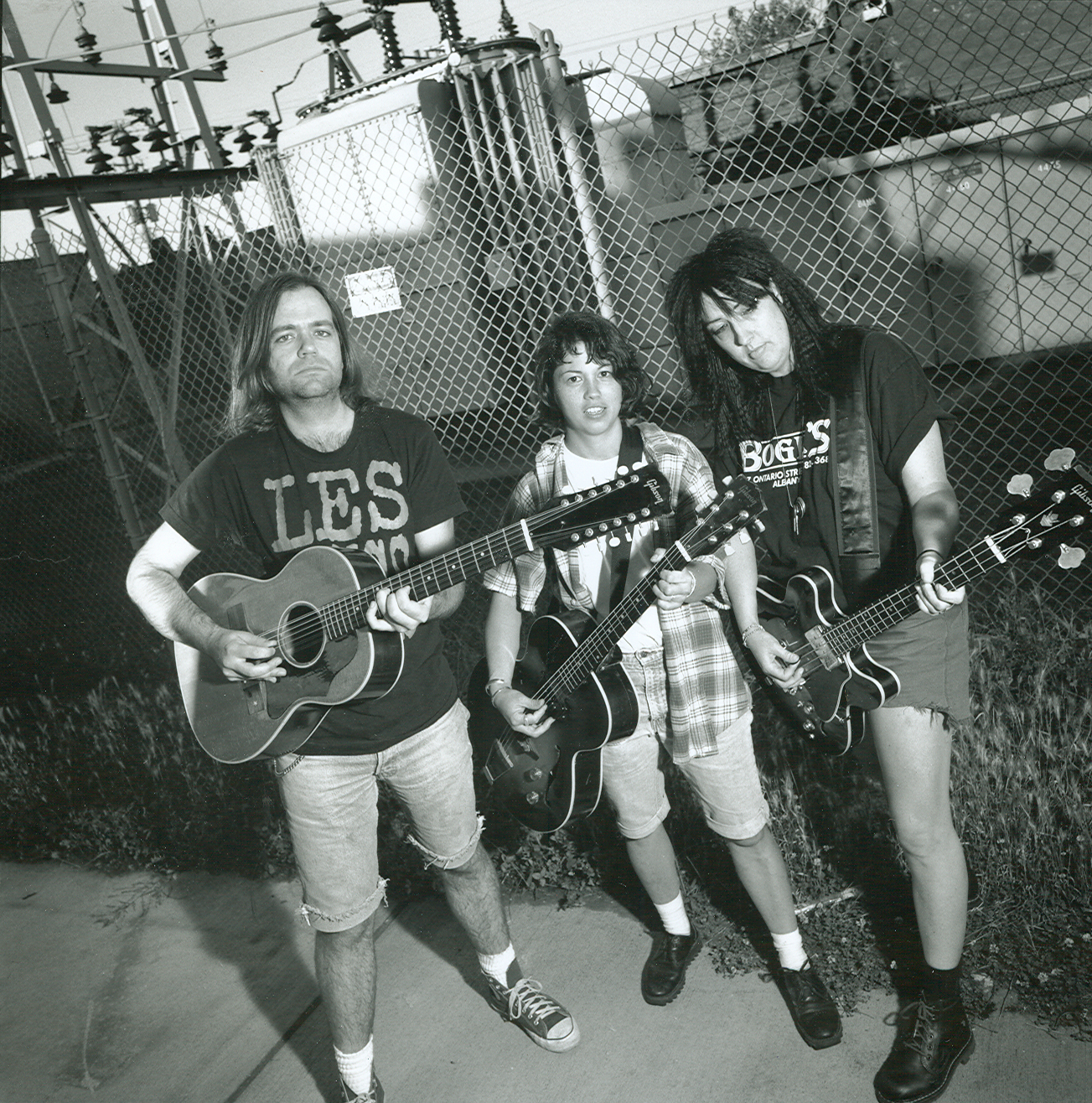 Having done the now traditional disservice of misrepresenting the Pacific Northwest’s contribution to indie music, and Seattle’s in particular, I’ve decided I’m going to make up for it by laying out the ugly truth that Seattle is not a culturally isolated place, a place in which one good thing happened that extended from 1984 to 1994 and abruptly stopped. Sure, something as unique as a regional sound or scene can’t really happen with the same magnitude anymore (Gainesville, Fla., was the last city with a really distinct, albeit less diverse, take on punk), but many other things have come and gone in Seattle, some of it sucked, but a lot of it was at least interesting and deserves a second, perhaps even third listen. Here are ten recordings from ten artists from Seattle who either existed before or after the whole grunge things, but were able to exist well beyond it. And no, I didn’t include the Sonics—deal with it.

The Fastbacks are kind of a weird band, not because they sound weird, but because of the opposite. Theirs is a sound that could be loved by just about anybody who loves rock n’ roll, or pop in general. Founded in the late-`70s, they were one of the first Seattle punk bands, and they kept going well into the `90s, going through more drummers than Spinal Tap—including one Duff McKagan, later of Guns N’ Roses—but retaining that same pop edge that would do the Buzzcocks proud. Since it’s hard to zero in on one particular release, as they’ve had many, Sub Pop’s The Question is No is a good summary of the band’s output. They also did a cover of Green River’s “Swallow My Pride” on Sub Pop 200 that is simply adorable.

In the `90s there were some people in Chicago who wore t-shirts that said “Wax Trax not Sub Pop” though it was a Seattle band that made one of the label’s best early releases. The Blackouts were one of the early Seattle bands to break from the straight punk scene, choosing instead to play a PiL and Magazine-influenced art-punk that managed to outdo both bands in confrontation and creepiness. They left only a handful of singles and EPs in their short existence but they packed in a lot of sonic variety without ditching the tension and eeriness. Their final EP Lost Soul’s Club was produced by Al Jourgensen, who brought out the industrial chill of their guitars, the chaos of their saxophone, and the borderline instability of the vocals. I don’t exaggerate when I say that it’s a very unsettling listen, and their creepy video for “Idiot” doesn’t help. It left an impression on Jourgensen, who recruited their bassist Paul Barker and drummer Bill Rieflin to join Ministry, the former of which became a crucial collaborator—and a far more disciplined one at that—in the band as it transitioned from crappy darkwave to the industrial metal it’s better known for.

Before Bernstein committed suicide in 1991, he was able to hear only one completed track off of his only album, “No No Man pt. 1,” though many others heard it when Oliver Stone included it in the opening credits of Natural Born Killers, making it the only good part of the film. Originally intended as a live album of songs to be performed at an actual prison, fate rightfully intervened to evolve the project into a showcase of Bernstein’s best and weirdest prose, poetry, and prose poetry, all set to producer Steve Fisk’s background music, at times channeling jazz, hip hop, metal and ambient. A deep distrust, if not full on hatred, of slam poetry is as natural as nocturnal emissions for any normal person, and while Bernstein was a part of that, he was nonetheless an alien presence, opening for the likes of Soundgarden, as well as Big Black’s last show. He made it his business to be confrontational whenever possible, apparently even performing with a small rodent in his mouth. Despite the gimmicks—some would say mental illness, which he did suffer from—he was a compelling, charismatic writer and performer, the best possible non-musical opening act. His gravelly, nasal voice exuded both anger and sadness, his mini-memoir “Face” is both disturbing and moving, it’s the most personal, stylishly composed document of self-loathing ever put to paper or tape.

Despite their best efforts, Mark Arm & co. were unable to convince their audience that Mr. Epp was the “worst band in the world,” at the very least they only sucked, and even then they evened everything out by being chaotic and funny. Imagine if you will a kind of art school Dead Milkmen, combining the fast hardcore of the time with a very untimely aesthetic of artistic cabin fever, the kind of creativity that comes from being inspired by Black Flag but being isolated from them for long periods. Mr. Epp is primary evidence for anyone who wants to make the case that “joke” bands can be far superior to legitimate bands like MDC, SSD and DRI.

On first listen Student Nurse could be easily mistaken for any modern Williamsburg or Echo Park hipster band, but soon enough one would have to face the glaring fact that Student Nurse doesn’t suck nearly as much as CocoRosie or Japanther. In fact, seeing how there’s finally a market for this band I’m shocked that vinyl fiends aren’t in desperate search for their EP or any of their singles as I write this. The band seemed like a fun little project to do at the time but anyone with a taste for eclectic dance punk with noisy guitars, a rhythm section that can seamlessly veer from fast-paced punk chords to mid-tempo grooves, and lyrics that meld the oddball poetic with the realist narrative would be tickled pink by them at the very least. For something that clocks in at just over nine minutes, there are a lot of solid, fleshy ideas here.

When I bought No Escape’s only album Just Accept It and saw the band photos decked in long hair, backwards caps, combat boots, and flannel, I forgot that I was listening to a hardcore band, so it was no shock to me that No Escape’s vocalist Tim Singer bailed from his later band Deadguy and moved from New Jersey to Seattle with his new band Kiss It Goodbye, composed of former members of Rorschach. She Loves Me, She Loves Me Not is one of the harshest records of the 1990s, period. And while some of it was written back east, the trudging, unhinged, and simmering tracks have a greater connection to that area’s legacy compared to Deadguy’s road rage lashing out that was right at home in New Jersey. This was helped with the claustrophobic production of Melvins producer Bill Anderson, who may well have locked the band in one of the city’s most desolate storage spaces during its rainiest season and dropped a few microphones in. After that, northwestern hardcore became less conventional, having paved the way for Playing Enemy (ex-KIG in fact), Botch, Himsa and Harkonen.

Like the Fastbacks, Young Fresh Fellows are an arch-pop act whose work is shockingly underappreciated these days considering all they have to offer, which is a shitload. They could well have rested on their laurels and become the Bangles to the Fastbacks’ Go-Go’s, but they seemed more content to make pop music with a more varied sound. Uniformity may work for bands like the Fastbacks, but the Fellows felt the urge to make songs out of the psychedelic, surf, arena, and garage rock formulas. This experience also includes clever, funny lyrics. Think of them as R.E.M., but more inconsistently insufferable.

The term “post-grunge” gives one the sensation, if not the actual occurrence, of vomiting in one’s mouth, and in most cases this is completely understandable as the term is mostly connected to those bands that took all the worst parts of Nirvana and Pearl Jam and made careers out of them—Nickelback, Seven Mary Three, Puddle of Mudd, Fuel, to name only a few. However if there is one band more deserving of the term it’s Earth whose sole consistent member Dylan Carlson used his compositional genius to push grunge’s extreme elements to even greater extremes. Earth 2 is slow, loud, long and sometimes painful to listen to if one is not in the right mindset. With tracks clocking in at up to 30 minutes and composed mostly of ear-splitting, distorted riffs layering over similarly extreme riffs, Earth pays amble tribute to Black Sabbath, St. Vitus and The Melvins by being just as revolutionary as they were, now they’re one of the most ripped-off bands in the underground, counting Isis and Sunn O))) among their followers.

The Accüsed – More Fun Than an Open Casket Funeral (1987, Combat)

The Accüsed had a heavy metal mascot that was decidedly hotter than Iron Maiden’s Eddie, but it was a heavy metal mascot nonetheless, and those with more sophisticated palates could logically write them off, though I wouldn’t recommend it. Even if one has to enjoy the concept of “Martha Splatterhead” with a certain dose of irony, it is undeniable that The Accüsed played a blistering version of thrash with a speed and intensity that gave them an easy connection to hardcore and punk bands like GBH, Die Kruezen and the Necros (thank God for GigPosters.com) and had their hands firmly planted in the future. They could be seen as an evolutionary link between Corrosion of Conformity and Integrity, though it might make more sense to see them as a direct ancestor to Converge whose work on The Poacher Diaries and Jane Doe modernize and intensify even more what The Accüsed were trying to get across.

Earth : Full Upon Her Burning Lips

The Bug vs. Earth : Concrete Desert