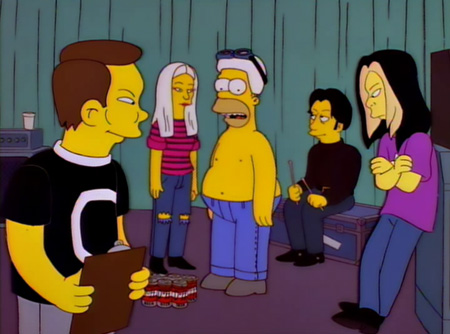 This week, FXX is right in the middle of its epic The Simpsons marathon, dubbed, appropriately “Every Simpsons Ever.” That’s a lot of episodes. A lot of episodes, and we at Treble have already watched most of them at least a dozen times or so. I, personally, have Seasons 3 through 12 basically memorized, so that’s something right there. Anyway, the time seemed right to compile a list of our favorite musical moments from The Simpsons, and that could be a very long list. Very long. I mean, where do we draw the line — David Byrne producing Homer’s hit song about Flanders? Troy McClure starring in the Planet of the Apes musical? N*Sync giving The Party Posse a gift basket with body glitter and a crowd taser? Believe us, this is a tough one. The guest stars alone are enough to make this an impossible task. But that doesn’t mean this isn’t happening. In the interest of keeping it brief, here is our list of the 10 best Simpsons music moments.

(Note: The Simpsons’ producers have been pretty vigilant about keeping stuff on youtube, so videos posted where applicable, in varying quality)

Who can resist a catchy jingle? Not me! And this one’s about as catchy as it gets: “Mr. Plow, that’s my name/ That name again is Mr. Plow.” Now, Homer kind of dropped the ball by hiring an ad agency that turned his simple driveway plow business into an abstract art piece, but then again, the client doesn’t always like Don Draper’s ideas, either.

“We Are the Mediocre Presidents”
(“I Love Lisa,” Season 4)

Springfield Elementary turned around its Presidents’ Day pageant pretty quickly, considering the casting happened on Valentine’s Day. In any case, it really came together, from Ralph Wiggum’s portrayal of George Washington to the giant Mount Rushmore prop, which includes a moving Teddy Roosevelt mouth that suggests everyone go buy some orange drink! The best part, though, is the “Mediocre Presidents” song, which celebrates the adequate, forgettable, occasionally regrettable presidents of the USA — including Taylor, Tyler, Fillmore and Hayes. Oh, and William Henry Harrison, who died in 30 days! (Song starts at 3:45)

Gentlemen, start your whacking! Springfield’s annual Whacking Day tradition — in which its citizens brutalize snakes in a shambolic orgy of misplaced aggression. None other than soul legend Barry White is invited to open the ceremonies, without actually knowing what he’s signed up for, and walks away after exclaiming, “You people make me sick!” To which the characteristically short-attention-span hordes of Springfield actually cheer. Meanwhile, Bart and Lisa attempt to save the snakes from all the whacking, and in the process discover that snakes respond to sonic vibrations. Naturally, the bassy vocals of White himself provide the siren song for the snakes to escape being clubbed. It doesn’t take much to convince White to croon to the slithering critters, however. As he puts it, “Anything… for a lady.”

Barbershop was all the rage in the 1980s, or so Homer Simpson tells Bart and Lisa when they discover some of his records with his own barbershop group The Be Sharps — the covers of which look suspiciously like Beatles albums (including Bigger Than Jesus, which riffs on both the cover of Abbey Road and John Lennon’s own famous interview gaffe). The entire episode, it turns out, is a 30-minute long homage to The Beatles, including Homer’s own interaction with George Harrison, wherein the legendary Beatles guitarist tells Homer where he can find the brownies. There are lots of in jokes and references, and outright hilarious moments, the best of which occur during the group’s auditions to replace Chief Wiggum, first with Groundskeeper Willie singing Petula Clark’s “Downtown” (“you can always go/ ACH! DOON-TOON!”), and then, in what might be the best laugh of the episode, Jasper singing “Theme From a Summer Place”: “It’s the theme/ From a summer place/ From a summer plaaaace/The theme…”

Mr. Burns throws himself a huge birthday party to distract himself from his yearning to be reunited with his old teddy bear, Bobo. And the musical guest of the evening is The Ramones, who deliver a performance of “Happy Birthday,” that Burns, himself, doesn’t appreciate, possibly because CJ Ramone ends it by sneering, “Go to hell, ya old bastid.” Naturally, Burns responds by demanding that Smithers have The Rolling Stones killed.

The Simpsons featured a lot of great original songs in its day, which combined both the clever humor of the show with a knack for Broadway-level songwriting that could win over even the showtune-averse (like myself). This is the greatest of those, an upbeat anthem from recently fired Kwik-E-Mart employee Apu Nahasapeemapetilon about how he’s found meaning and purpose beyond working at the Kwik-E-Mart — even though he really hasn’t. And what begins as catchy and hilarious turns sad quickly when Apu enters the final reprise: “Who needs the Kwik-E-Mart? I doooooo!”

Another great original song, “See My Vest” parodies Beauty and the Beast soundtrack tune “Be Our Guest,” only swapping the original’s singing-candlestick message of vocational service for Mr. Burns’ compulsion to hunt animals for fashion. The vest is made of real gorilla chest, if you were wondering (“I really like the vest!”), though his closet also contains gopher loafers, grizzly bear underwear, and turtles’ necks. In the end he can’t really go through with skinning the greyhound puppies, however, because — as Burns puts it — they’re all a bunch of little Rory Calhouns, standing and walking (and being too adorable to harm, natch).

I couldn’t very well narrow this episode down to just one scene. Nope — it’s a smorgasbord of notable quotables and cameos, including Sonic Youth stealing from Peter Frampton’s cooler, Cypress Hill possibly ordering an orchestra while high, and Smashing Pumpkins’ Jimmy Chamberlin shouting, “I’m gonna buy a walk-in humidor!” The episode is really about Homer’s attempts to connect with his kids via trying to understand youth culture, which goes pretty badly when he expresses bemusement at their not knowing who Grand Funk Railroad is: “You kids don’t know Grand Funk? The wild shirtless lyrics of Mark Farner? The bong-rattling bass of Mel Schacher? The competent drumwork of Don Brewer? Oh, man!” Homer makes up for his uncoolness by becoming a sideshow freak who takes cannonballs to the gut, which is at least temporarily cool enough to keep disaffected Gen X burnouts interested (“Are you being sarcastic?” “I don’t even know anymore.”).

“Can I Borrow a Feeling”
(“A Milhouse Divided,” Season 8)

Milhouse is a poindexter, but he’s obviously a chip off the old block: His pop, Kirk Van Houten, is himself a pretty big loser, and when he and wife Luann divorce, things go south for him pretty quickly. He gets fired from Southern Cracker (“The Dryyyyy Cracker”) and has his car stolen by a new not-really-girlfriend who works for KZUG. She promised to play his demo tape on the air, which features the runaway hit “Can I Borrow A Feeling,” which goes a little something like this: “Can I borrow a feelin’? / Could you send me a jar of love? / Hurtin’ hearts need some healin’ / Take my hand with your glove of love!” It’s even got his picture on the front!

So, this one doesn’t really feature any actual music — just a musical icon. After Homer Simpson goes to the annual Springfield chili cookoff despite Marge’s protests, he has a bad trip thanks to the merciless pepper of Quetzalsacatenango. In his hallucinations, he meets his spirit animal, a coyote voiced by Johnny Cash. Cash portrays a mysterious and mischievous figure with some resemblance to the Cheshire Cat, who — in the middle of a stunningly animated psychedelic netherworld — tells Homer he needs to find his soulmate to be complete. It’s weird, it’s funny and in the end, actually pretty touching. 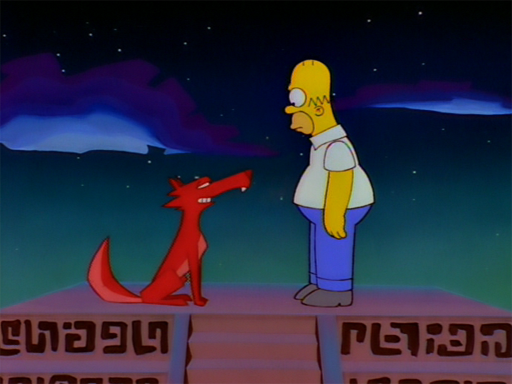