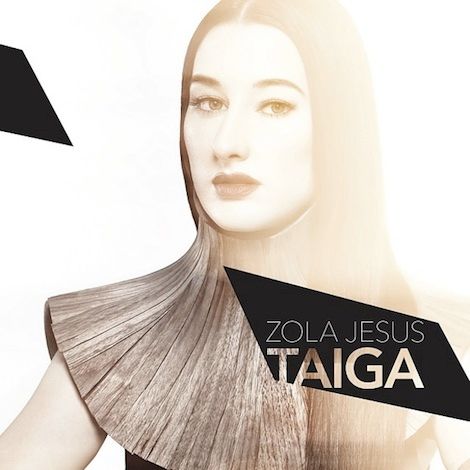 If Zola Jesus’ Taiga sounds, upon first listen, like a stylistic departure from the lo-fi, distorted darkwave sounds of years past, Nika Roza Danilova has some reassuring words for you. In September, she tweeted, “Anyone who wishes my new music sounded more like The Spoils can just run Taiga through distortion and reverb. The songs are the same.” At this point, however, it’s unclear why anyone would expect to hear the Los Angeles art-pop artist to revisit the sounds of her Sacred Bones debut, released when she was only 20 years old. She’s been on a steady progression ever since, embracing atmospheric goth-pop textures on 2010’s Stridulum and Valusia, and fleshing them out into more immediate, often dance-ready structures on 2011’s Conatus. The reverb and distortion that helped introduce Zola Jesus in her earliest days have been, at best, a supporting player ever since.

The bigger story on Taiga is not merely that Danilova has taken on a cleaner sound, but one that’s much more explicitly pop than anything she’s released before. The signs were always there if you cared to look for them, however, starting with her anthemic 2010 single “Sea Talk,” M83 collaboration “Intro,” and eventual signing with Mute Records — home not only to M83 but an entire canon of synth-pop heroes, from Depeche Mode to Erasure. With the issue of “Dangerous Days,” the first single from Taiga, Zola Jesus more or less made it official. With its sweeping chorus, huge swells of melody and warm layers of synthesizer, “Dangerous Days” confirmed that the haunted atmosphere of yore was — like the noisy production techniques of The Spoils — mostly a thing of the past.

That’s not entirely how Taiga plays out, however. In terms of both songwriting and atmosphere, there’s nothing here that should come as that much of a shock to anyone who gravitated toward songs like “Sea Talk” or “In Your Nature.” On some level, Taiga makes perfect sense — a logical progression if you want to call it that — given Danilova’s musical history. It’s a sophisticated record, but an accessible one. And it’s a pretty record, but not always a conventional one. On a track like “Ego,” Zola Jesus is still drawn to curious and avant garde sounds, backed by a hushed plunk of synthesizer that ultimately erupts into the kind of dramatic darkness that truly does a voice like hers justice. And the sparseness and darkness of “Nail” still finds her in a league with like-minded Angelenos like Chelsea Wolfe, as she commands, “Pull the nail out with your teeth/ Set me free,” against buzz saw synths and a chorus of ghostly voices.

No matter the artistic phase, label or album, the songs that have always suited Zola Jesus best are big statement songs: Heroic, hands-in-the-air expressions of emotion that a lesser artist would have a bear of a time living up to. Not Danilova; she’s slightly more reserved on a highlight such as the trip-hop-influenced “Long Way Down,” but when the moment strikes, she lets those operatic pipes do the work. And on closer “It’s Not Over,” she damn near comes close to reaching mainstream EDM levels of immediacy, without succumbing to the pop-by-numbers trap that has led so many into mediocrity. But there’s no better fusion of Zola Jesus’ past and present than the opening title track, which fuses the eeriness she’s so expertly mastered before with the soaring sensibility that has led her to this new fusion of art and pop. And while not every track on Taiga reaches for statements quite this big, when they do arrive, their impact feels that much greater.