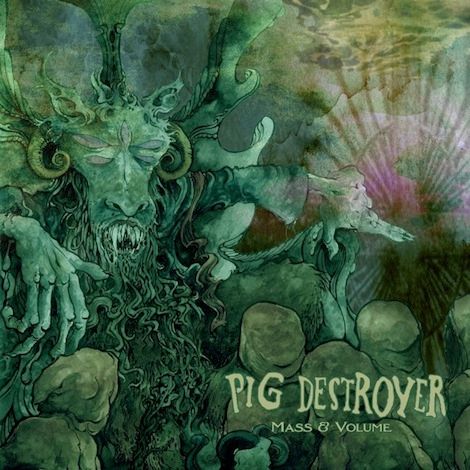 Pig Destroyer is a grindcore band. In fact, since their 2001 Relapse debut, Prowler in the Yard, they’ve more or less been the grindcore band — quickly rising up into the role of the preeminent purveyors of grind in the new millennium thanks to their uniquely ugly and unrelenting take on the classic sound as pioneered by bands like Napalm Death and Repulsion. Part of that is because of how non-traditional the Washington, D.C. group approaches it; death metal, thrash, powerviolence, noise and post-hardcore all play a role in their unique brand of grindcore, and as a result, they’ve done more for the sound than anyone in recent memory. It’s why their third album Phantom Limb was honored as Decibel‘s No. 1 album of 2007, and for that matter, why two of their records ended up in Treble’s own Top 100 metal albums of all time. So one would be forgiven for not expecting Pig Destroyer’s new EP, Mass & Volume, to in fact be two lengthy tracks of slow-moving, feedback-heavy doom metal tracks.

Mass & Volume isn’t really a proper follow-up to 2012’s Book Burner, but rather a long-awaited release of two unlikely pieces of music from the Pig Destroyer archives. Originally recorded in 2006 with the intention of being added to Phantom Limb (and then subsequently cut from the album), “Mass & Volume” and “Red Tar” first saw the light of day in 2013 after the death of Relapse staff member Pat Egan. The band released the two as a digital EP and donated the proceeds to Egan’s family, making it an unlikely tribute, if a genuinely powerful one. And at the heart of that gesture is one of the band’s most interesting, if unlikely releases.

There’s not a trace of grindcore on Mass & Volume; if I were to listen to the album blindfolded without any prior information, I wouldn’t guess that I was hearing Pig Destroyer. The band has always been versatile, but here they seem to completely abandon the template, letting go of their hyperspeed breakdowns and relentless pummel in favor of a kind of crushing doom that moves at roughly one one-hundredth of the speed as their typical song, and in the case of the title track, 19 times as long. In fact, “Mass & Volume” barely even has riffs — guitarist Scott Hull unleashes one monolith of low-end at a time and lets each booming chord reverberate until it retreats back into a squeal of feedback. There’s an almost meditative ambiance, aided in part by the introduction of what sounds like a sitar in its introduction. It’s alternately the strangest and most beautiful thing Pig Destroyer has ever recorded.

By comparison, “Red Tar” is more accessible, more conventional even. It’s still a good distance from the band’s typical exercises in speed and precision, but it’s got a bit more momentum in its sludgy chug. Vocalist J.R. Hayes is more recognizable in his role as frontman here, his abrasive bark one of the few elements that marks it as a Pig Destroyer track. Change, in this case, is a good thing, and Pig Destroyer not only take on a more challenging approach but actually succeed wildly at it. It’s still heavy and intense, of course — nobody should expect to hear PD Goes Acoustic anytime soon. But it’s a side of the band that’s rarely been seen, and reveals new insight into what they’re capable of. Knowing its backstory isn’t necessary to enjoy it, but both the Pig Destroyer Mass and Volume EP and its strange journey show that an extreme band can also be capable of extreme humanity.