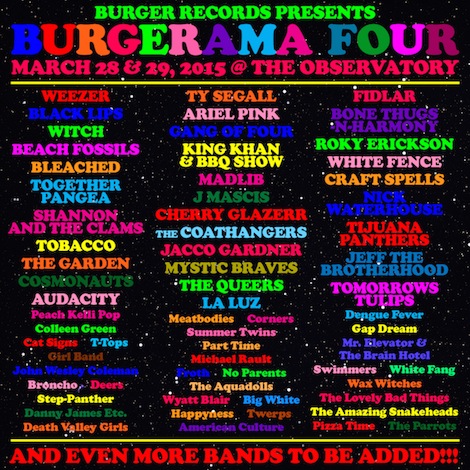 Burgerama is returning in 2015, and Burger Records is bringing a long list of great bands to play the festival. Burgerama 4 will go down on March 28 and 29, 2015 at The Observatory in Santa Ana, California. And there will be crunchy guitars aplenty this time around, as well as some hip-hop beats. Next year’s festival will feature performances by Weezer, Ty Segall, Black Lips, J Mascis, Witch, Fidlar, Bone Thugs-n-Harmony, Madlib, Gang of Four, Beach Fossils, Ariel Pink, The King Khan & BBQ Show, Roky Erickson, Bleached, Tobacco, The Coathangers, The Queers, Jacco Gardner, La Luz, Mystic Braves, White Fence, Craft Spells, Jeff the Brotherhood, Dengue Fever, Colleen Green, Shannon and the Clams, Meatbodies, Twerps, The Amazing Snakeheads, and a whole bunch more, which you can see on the flyer above.

More bands are expected to be added to the Burgerama 4 lineup in the coming weeks. Tickets will go on sale on Friday, Dec. 12. You can get those here.