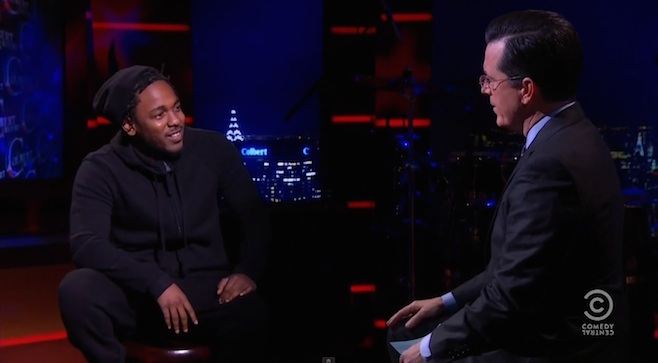 Kendrick Lamar‘s follow-up to his 2012 masterpiece good kid, m.A.A.d. city is without question one of the most highly anticipated albums of 2015 around these parts, and that likely goes for most people reading this right now. And he’s been making some notable appearances this year, first showing up on Flying Lotus’ “Never Catch Me,” which was one of our favorite tracks of 2014, and then with the release of his new single “i“.

Well, tonight Lamar just ramped up anticipation a little bit further by performing a brand new song on The Colbert Report. He performed the untitled song with bass wizard Thundercat and vocalist Bilal. It’s produced by Astronote, according to MissInfo.tv. Lamar also sat down for an interview with Colbert, and was asked, “Why did you decide to name yourself after Anna Kendrick and Senator Lamar Alexander?” Additionally, Lamar said that he prefers to be referred to as a writer instead of a rapper.

Watch the performance of the new Kendrick Lamar song below, complete with some Thundercat bass jamming.