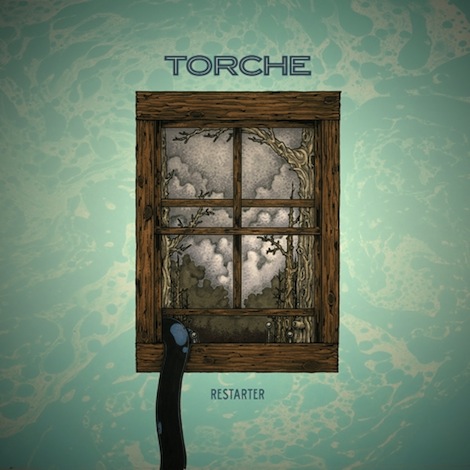 The greatest tool at Torche‘s disposal has always been their sense of fun. In fact, it’s one of the few constants in the Miami-based metal band’s career, which has been marked in large part by how little in their world actually stands still for long. Their lineup has shifted a bit, with Andrew Elstner having replaced outgoing guitarist Juan Montoya in 2011 after the band’s brief stint as a trio. And they’ve played a long game of label hopscotch, having leaped from Robotic Empire to Hydra Head to Volcom, eventually landing on venerable metal heavyweight Relapse, which is releasing their latest album, Restarter. But what hasn’t changed is the approachability and hook-heavy approach of their bubblegum sludge-rock — nor the giddy, euphoric thrill that comes with it.

This is metal we’re talking about, however, that giddy thrill comes in the form of riffs that wallop like a prize-fighter’s punch, or rhythms that throttle and jostle with manic intensity. It’s with good reason that they’ve been referred to as “doom-pop,” and albums like 2008’s Meanderthal and 2012’s Harmonicraft bore that out with radio-ready hooks, sing-along choruses, and a perfectly gnarled sound engineered to leave every dizzy and delighted head ringing.

As Torche transitions to Relapse with Restarter, the “pop” half of that equation hasn’t waned, necessarily, but it’s also less explicit than the melody-forward anvil-heavy alt-rock of their previous album. It’s tempting to read more into the title, Restarter, than necessary; sure, they have a new label, and with that often comes the opportunity to start fresh. But Torche aren’t so much reintroducing a new-and-improved, rebranded version of themselves as they are simply refocusing on aspects of their sound and identity that were already there. The window illustration on the album’s cover portends something far darker and less outwardly absurd than the rainbow-vomiting unicorns of Harmonicraft. Similarly, opening track “Annihilation Affair” moves at a much slower, sludgier pace than that album’s soaring bolt of lightning, “Letting Go.”

The Torche of Restarter is, at many points, more unambiguously metal than on their last couple of records, churning and chugging with the murky, oozing sensibility of a band like Indian, albeit fed through Torche’s uniquely accessible filter. This may have something to do with Steve Brooks taking some time to record and tour with his other band, the similarly sludgy Floor. Take “Minions,” which stomps slowly and powerfully, but rises up into a hypnotic, psychedelic swirl of guitars around the three-minute mark. And “No Servants” withholds the payoff as well, relying on a bass and feedback thud until a little over a minute in, at which point there’s a brief flash of trippy, mesmerizing riffage. Not that Restarter is all about delayed gratification; the soaring “Bishop In Arms,” streamlined “Loose Men” and buoyant “Blasted” are all shorter, sharper installments of classic Torche — big guitars, big hooks, no waiting.

As much as any of Torche’s albums are about change, Restarter marks another important chapter in the band’s evolution. It’s an album that rewards patience, carefully building up to each of the record’s many brilliant moments. And it’s not just on a song-by-song basis; the incredible, nearly nine-minute title track comes right at the end, closing out an album of melodic surprises with the biggest one of all. It’s the band’s own hybrid of heavy psych and shoegaze, carrying out a krautrock-style groove toward the finish line as Brooks and Elstner’s guitars rise ever higher, effects looping over effects, riffs stacking upon riffs. It’s a powerful climax, not just for the album but for Torche as a band. This isn’t a case of starting over so much as exploring the nuances of something that already worked from the start.