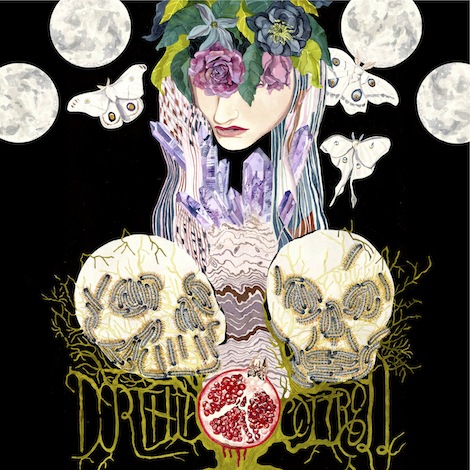 Dorthia Cottrell has a rich and soulful voice, the type that’s custom made for the kind of earthy, gothic folk music that comprises her debut, self-titled album. To hear “Maybe It’s True,” the album’s six-minute, gospel-tinged centerpiece, you’d never know that Cottrell is primarily a metal performer, having fronted Richmond doom outfit Windhand for the past six years. But it would be a mistake to think that one has nothing to do with the other; there’s no greater exercise for a vocalist than to face off against a trio of tube-head cabinets, each blasting out a thick and noxious wall of distortion in drop-B tuning. The greater challenge is to do it without screaming, and on Windhand’s marvelous 2013 album Soma, Cottrell not only does battle with such imposing sounds, she does so melodically, maintaining both power and grace while holding her own in a storm of titanic riffs.

That power translates remarkably well to a stripped-down and spooky folk environment like that of her debut album. It doesn’t take much squinting to imagine any of the album’s 11 tracks as much louder, denser tracks without losing any of the emotional, eerie vibe that they carry. As they appear on the album, however, there’s a certain, stunning darkness in just how spare and skeletal they are. Heavily inspired by the haunting country ballads of Townes Van Zandt while leaning toward the gothic sounds of 16 Horsepower or David Eugene Edwards’ subsequent project, Wovenhand, the album is at once affecting in its simple expressions of pain and longing, yet highly unsettling in its spectral atmosphere and occasional nods toward the occult.

The 11 songs on Cottrell’s debut album were written over the course of a decade, making it the rare situation — like Jessica Pratt’s eponymous debut — in which an album a long time in the making has turned out to be surprisingly cohesive and tightly crafted. A lot of that can be attributed to the sound of the record, which very infrequently strays from simple arrangements comprising Cottrell’s voice and acoustic guitar, and Kevin Wade Inge’s pedal steel. Sometimes there’s less, like on the stark power-chord strums of “Vessel,” and sometimes there’s more, like when an electric guitar with a sitar-like effect enters the frame on “Orphan Bird.” But most of the time, Cottrell keeps it as minimal as possible, allowing her evocative vocals guide the album down its winding, dusty path.

The album awakens slowly, but when its blood starts flowing, it’s breathtaking. “Cemetery Song,” the album’s atmospheric, raga-like opener finds Cottrell’s guitar and voice entwined note for note, the heavy reverb treatment on her vocals arriving like a message from beyond. But as the song comes to life, Cottrell seems less like a lost spirit and more like someone who has seen too much, crooning lines like, “This is where forever dies… Make your amends now/’fore the sun goes down.” Just a few tracks later on “Oak Grove,” she moans a chilling but lascivious blues, turning her back on the lord against a gorgeously weeping lead from Wade Inge: “God is not my problem and my flesh is weak/ I’m the kind of girl that needs a devil in a man/ To satisfy me.” Yet “Vessel” is the moment where Cottrell’s background in metal is made most explicit, and even here, it’s only hinted at. Its melody could easily translate into a dense, two-guitar rumble, but here it’s one of the album’s simplest tracks, and strikingly beautiful because of it.

Cottrell’s self-titled album arrives between two Windhand releases, the next of which is due for a fall release via Relapse. And when it comes, Cottrell will once again most likely prove a formidable force in the context of much louder and more intense material. But here, she allows herself a lot more space to stretch out and showcase the full scope of her abilities, which in this case often means a softer touch or a subtler approach. Cottrell is truly one of the great metal vocalists of our time, but at heart, she’s a troubadour in a timeless folk tradition, with a gift for telling stories and her gaze fixed toward the darkness.