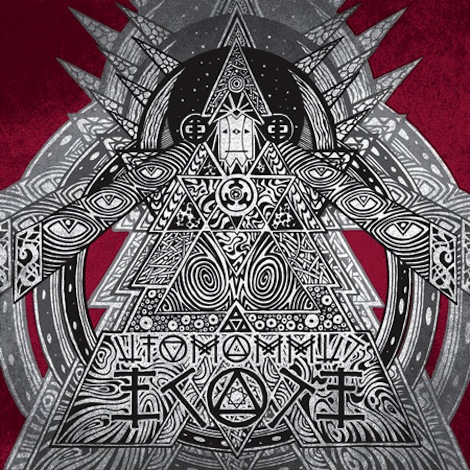 Ufomammut‘s name — translated from their native Italian — literally means “UFO Mammoth.” It doesn’t take a fluency in the language to figure that out; some common sense will do, considering the words look pretty much the same in English. But unlike some of the more common portmanteaus in metal — Goatwhore, Skeletonwitch — Ufomammut’s serves not just as a cool combination of tough-sounding or stoner-friendly words, but rather as an effective way to describe the strange and utterly crushing combination of sounds they wield. First, there’s the UFO: The space-age, psychedelic nature of their music, often reflected in ambient interludes or ethereal intros, or the swirling layers of effects and synthesizers that bubble up beneath their melodies. And then there’s the “Mammut”: Their music is heavy — sometimes absurdly so. It’s always impressive to hear just how deep and nasty metal guitarists can make their instruments sound, but Ufomammut goes even deeper and nastier into some kind of mutant sludge from above.

That brawny, albeit bizarre combination of sounds is what makes Ufomammut occupy that liminal space between metal and heavy psych. And they ride that middle ground better than most of their contemporaries, simply because they never dilute either half of their monstrous fusion. And as a result of that, Ecate — the band’s eighth album and follow-up to the 2012 dual Oro albums — keeps up a thrilling and consistently mind-bending progression throughout its 45-minute span. That might not sound all that long, and by doom or sludge metal standards (both of which apply with a band this beefy and rumbling) it isn’t. But with three of the songs either approaching the 10-minute mark or outright surpassing it, Ufomammut take the opportunity to stretch out their compositions as far as they can, only occasionally content to let a song be anything less than a giant unto itself.

Everything on Ecate certainly feels giant. A concept album surrounding Greek goddess Hecate — known for being associated with witchcraft, and often being invoked by Willow Rosenberg on Buffy the Vampire Slayer — Ecate offers its own heady brew of spacious psych epics and thickened swirls of riffs and booming rhythms. When the band is gunning at full speed, like they are halfway through the nastily awesome “Temple,” they sound like they’re the heaviest band on the planet. And when they’re spacing out, like on the Vangelis-with-a-bigger-bong interlude “Revelation,” they’re simply drifting, riding some interplanetary vibe before the next guitar riffs arrive to send them crashing back down to earth.

And they always come crashing back down to earth, leaving a smoking crater in the spot where they land. “Plouton,” which vies for the heaviest moment on the record, pits Moog lasers against the ugliest, most incredible doom boogie you’re likely to hear for some time. Still, the most impressive parts of Ecate — “Plouton” aside — are those where the band somehow feels both terrifyingly heavy and utterly transcendent, like the space-prog soar of final track “Daemons” or the heady Olympian circle pit of opener “Somnium.” On a textural level, it’s all pretty impressive, actually. In the moments where the band’s melodies match up to their sheer heft, however, Ufomammut truly achieve their alien beast potential.