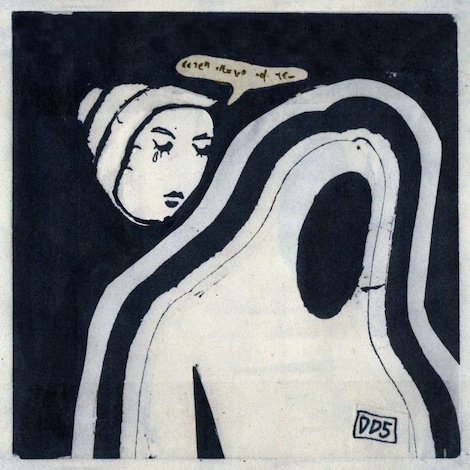 When a label promotes a release, it can basically go one of two ways: The record will end up as good as advertised, or fall short of expectations. It’s not like any record company is ever going to speak poorly of its own product, even if the music isn’t that great; that’s bad for business. Labels promote the music that they release because it’s part of their job, and to some degree, you expect them to like it; they did, after all, want to release that artist’s music. But what if the album is a far cry from its depiction in the press release? Is this false advertising? Miscommunication?

In Doldrums’ case, maybe I’m not hearing The Air Conditioned Nightmare in the same way that Sub Pop did. The veteran Seattle label says that newly signed Doldrums have “created something special,” and that The Air Conditioned Nightmare stands alone. And it may, for all of its weirdness, but it’s going to take way more listens than I’d prefer to reach Doldrums this time. First album Lesser Evil was bolder, more hyperactive, and, overall, a more pleasing and imaginative listen. If Lesser Evil was fine oil, then Air Conditioned Nightmare is getting dark and needs to be serviced. Airick Woodhead, the 25-year-old son of Canadian folk artist David Woodhead, has contracted instead of expanding on his earlier success.

Doldrums made 2013’s Lesser Evil on a busted laptop inherited from his more famous friend Grimes (he’s actually staring into the cracked screen on the album cover). The Air Conditioned Nightmare is once again made with samplers and DJ gear, but the bump up in production quality can make it sound like The Postal Service on acid, or a sketchy gang bang between the Verve, Nine Inch Nails, My Bloody Valentine, and The Prodigy. It’s druggy and uncomfortable — anxiety is Airick Woodhead’s default state, and it creates a frustrating conflict with his new music.  I want to sink all the way into Air Conditioned Nightmare, but the poor flow of the album won’t allow for such an experience.

The first four tracks would make for a decent EP of 16 minutes, and we could even afford to throw in the radical blip nightmare, “My Friend Simjen,” making a strong 20 minutes of mind alteration. “HOTFOOT” starts things off with trappy, frenzied percussion that is fun if you have enough energy. “Blow Away,” sung in Woodhead’s careless brogue (“Kiss me once, I fall down / kiss me twice, I’m underground”) is primal EDM; “Funeral For Lightning” flutters toward atmospheric pop; and “WeAwake” moves hips, rolls tides, begs for a dance floor. But then The Air Conditioned Nightmare, named after the 1945 Henry Miller essays, gets sucked into oblivion. Parts of “Video Hostage” and “Closer 2 U” seem to mimic The Field, which is way out of Doldrums’ league anyway; “Closer 2 U” is not much more than a constant beam of drone. “Loops” has tough transitions — rolling, stalling, rolling, and stalling; “Industry City” is as hollow as hell.

After a promising rise, Doldrums is stumbling. For all the talk of The Air Conditioned Nightmare being “special,” that just doesn’t seem to be the case. I really tried, but I’ve reached the limit on this one. And Doldrums seems to indicate the feeling is mutual: “I think we should disconnect.”