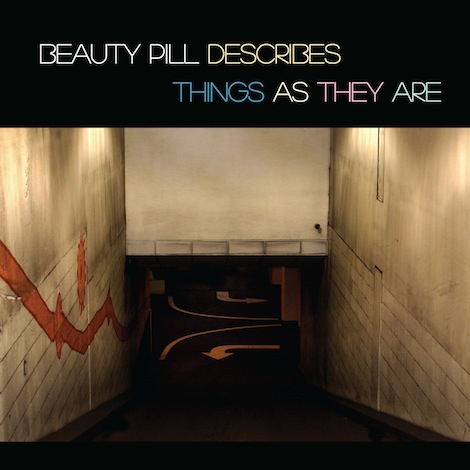 Chad Clark had a heart problem. Not the sort that has inspired art and literature for centuries; not a heartache, but a literal viral infection that threatened his life. In 2007 — just three years after Beauty Pill’s excellent post-punk debut (The Unsustainable Lifestyle) combined palpable aggression with a calm, understated demeanor — Clark was facing a very likely end to his life. In a recent interview with NPR, he shares that “at one point, it was 22 percent chance of living for another year.” I’d say that’s as good a reason as any to put your band on hiatus.

But several years, a couple open-heart surgeries and one miraculous recovery later, Clark is back with Beauty Pill’s sophomore follow up, Beauty Pill Describes Things As They Are. The record could not have a more perfect title; over its 12 tracks, Clark & Co. don’t hold back, mixing musings on disease and mortality with pointed discussions of race, politics and police brutality. It’s a record that pushes forth Clark’s identities — as a survivor, a musician and a black American — into center stage and surrounds them with lush, experimental instrumentals that depart rather heavily from the indie-rock leanings on The Unsustainable Lifestyle. This is due, in part, to Clark’s surgery-induced injuries, which left him unable to pick up his guitar. Instead, he channeled his artistic energy into his computer, producing a collection of demo tracks inspired by electronic music and hip hop production. Clark has been responsible for a variety of sounds in his lifetime, both in his own bands and in production/engineering roles for the likes of The Dismemberment Plan, Fugazi and Q and Not U, but never before had he harnessed sounds quite as ambient or otherworldly as the ones he constructed during that period of vivid experimentation.

Beauty Pill Describes Things As They Are is the sound of the band diving into, deconstructing and re-assembling those demos as a live band, and the result is both synthetically alien and bursting with the desire to live. Leading with the heavy line “I want more life, fucker,” Clark has never been so straightforward about his frustrations. In many ways, it’s as if his near-death experience further motivated his desire for candid critique. “Drapetomania,” a song named after the “condition” that pre-Civil War-era pseudoscientists blamed for a slave’s desire to escape capture, drops jittery lines like “The neighbor’s wifi is called ‘magic negro’ now/ I am gonna burn his house down,” and it’s not the first time Clark issues a calm-voiced threat on the record. Elsewhere, on “Ain’t a Jury in the World Gon’ Convict You, Baby,” Clark utters, “The cop’s a matryoshka doll/ inside there’s something really fucking small,” a line that would normally sound more tangible spilling from the lips of Guy Picciotto. But as calm and controlled as Clark often is, there’s an aura of experience that makes his cynicism here resonate in a way that feels both natural and unforced.

Beauty Pill take momentary breaks from that groove-driven aggression — diving into momentary excursions of calming, world-music-inspired bliss in the record’s instrumental passages — but that irritation returns in full force by the end of the LP. “When Cornered” offers lines like “but if you really wanna take me out/ You’d better do it in one shot/ Cause the next one will be mine/ And I don’t fuck around,” and one can’t help but think that Beauty Pill Describes Things As They Are is Clark’s half-serious threat against a world that he imagines might have wanted him dead on purpose. Those sinister sorts of thoughts are plentiful here, but perhaps most resonate on the closing cover of the classic Lungfish track “Ann The Word.” The once melancholy, abstract verse of “This is the last song I sung/ a small part of me died” becomes unprecedentedly visceral when infused with the reality of Clark’s recent situation and the version’s frenetic production. That song’s ominous hook, “a small part of me died” erupts into a glitchy explosion comprised of static and sampled voices. But, in the end, the distraction breaks and we’re left with one clear-voiced message: “The world vanished in a gentle breeze.”