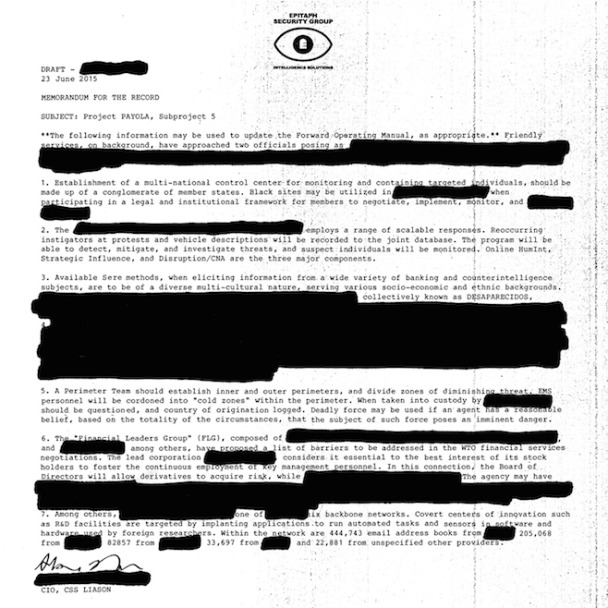 You don’t really have to be a Conor Oberst fan to enjoy Desaparecidos’ Payola, and that’s kind of a new thing for the band. The singer/guitarist’s decidedly edgier side-project resurfaced after Bright Eyes released The People’s Key, their seventh record (and possibly their final), but an unaware listener might mistake them for an entirely new band. After all, it’s been quite a while since Desaparecidos released 2002’s Read Music/Speak Spanish, and any band or musician is bound to change and grow when given over a decade to do so. But in the case of Payola, that isn’t a gradual development made from one album to the next. Instead, it’s a rare situation where the entire line-up of a band broke off after only one proper release, only to reassemble its entire original line-up after further developing their skills in a variety of acts and sub-genres.

Of course, some of those transformations are more drastic than others, and Oberst’s transformation is definitely the elephant in this room. Whereas Read Music found the young singer/songwriter at his most moody and introspective, nestled between the devastating Fevers and Mirrors and the more plainly cathartic Lifted, Payola is a record helmed by a grown man who’s vastly matured as both a lyricist and vocalist. This is absolutely clear in the subject matter as Oberst lets go of the sorrowful rants about monogamy, suburbia and shopping malls, instead penning short, pointed anthems about more global (or at least national) issues like immigration reform, capitalism and institutionalized racism. Payola is part of a recent trend of Oberst learning to write songs that don’t have so much to do with him as a character, and instead translate his views into a broader, more empathetic lens. In a way, these are folk songs filtered through layers of distortion, volume and intensity.

Along those lines, Payola finds Desaparecidos trading in the comparisons they got in the early ‘00s to being a noisier Weezer or a whinier Dinosaur Jr., and find themselves channeling a different subset of ‘90s indie in the form of the quick-witted anthems of Bad Religion. These are smart, edgy punk songs that are simple enough to sing along to but boast just enough complexity to get some gears spinning in the old cranium. Save for a couple slightly groan-worthy moments (namely a ‘oh-oh’ chorus on “City On The Hill”), Oberst manages to wield a less-is-more writing style that once seemed impossible for the verbose writer, and one that he’s never mastered with such dynamic energy.

When Desaparecidos broke up in 2002, it was reportedly because Oberst was uncomfortable with the intense exposure that the quintet gained after touring with Jimmy Eat World, and couldn’t see himself managing two relatively popular indie-rock acts. But the small irony there is that, with Bright Eyes seemingly out of the way, Oberst—with Desaparecidos at his side—is making some of the most tangible and readable work in at least ten years. These songs don’t sound much like anything Oberst had produced before, and that’s exactly why they’re more than worth a careful listen.

Thermals – Now We Can See

Superchunk – No Pocky for Kitty