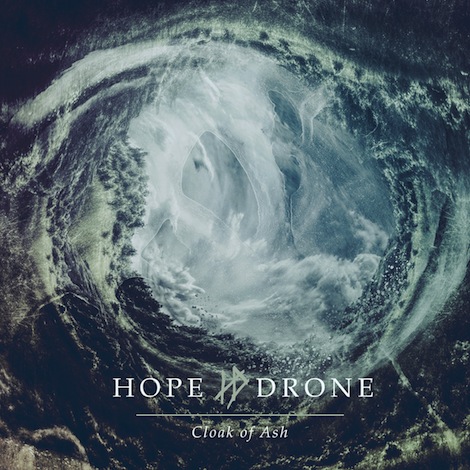 Earth has borne witness to five different mass-extinction events, all of which happened millions of years ago, and most of them caused by geological phenomena. One of the most significant of these, the Permian-Triassic extinction (which has come to be colloquially known as “The Great Dying”) saw the end of 96 percent of marine species and 70 percent of terrestrial vertebrates, thus eradicating a majority of life on earth, caused most likely by a movement of plate tectonics that resulted in a greater concentration of methane gas on the planet. It’s scary to think about life on earth simply coming to a halt like that, but the horrifying truth is that scientists predict exactly such a thing happening in the not-too-distant future. And the culprit, it would appear, is human beings.

Based on the bleak, apocalyptic scenarios outlined in Hope Drone‘s Relapse debut Cloak of Ash, it’s safe to assume that the Australian black metal outfit is familiar with the predictions of an oncoming extinction. And in spite of their name, which comes from a Godspeed You! Black Emperor live staple, there’s little hope to be found on this 77-minute survey of humanity’s failings. Indeed, Cloak of Ash is a dark record. By nature, black metal pretty much has to be, whether it’s in the form of Satanic praises or sheer brutality. But Hope Drone’s darkness is all the more devastating, if only because it comes from a place that’s not rooted in cartoonish mythologies, but in a real, honest pessimism about the fate of humanity.

Hope Drone’s delivery method for such unbearable visions, however, is utterly breathtaking. The four-piece builds their sprawling, blackened hellscapes on more than rote black metal tropes, pouring their efforts into songwriting that doesn’t just aim for the visceral, or even the emotional, but for a sophisticated and gorgeously written form of abrasive epic. Yet the sheer scope of these mostly 10-plus-minute giants requires more than patience—there’s an attention to detail and sheer endurance to the songs, in a fashion not too far removed from the gut-wrenching sprawl of Weakling’s Dead As Dreams, that rewards with secondary and tertiary listens. The 20-minute opening track “Unending Gray” is a demanding but majestic beginning to what ultimately becomes a more accessible, yet no less colossal record. There’s a rise from tensely rumbling low-end drone in “Every End is Fated in its Beginning” on up to an awe-inspiring tremolo assault, guided by Christopher Rowden’s poetic elegy for a dying world: “Mourn the last light, it’s fleeting passage/ Mourn the breaking day.” And the gentle, dusty strum of “The Chords That Thrum Beneath the Earth” give way to a driving, yet destructive melody, and an even more hopeless look at the dismal rock we inhabit: “And in the breaking light, we’ll see the world for what it is/ Darkness unredeemable.”

Without the deafening assault of shoegaze-leaning black metal arrangements throughout Cloak of Ash, the bleak nature of the record would be almost too much to bear. There’s little to no light to be found here, but Hope Drone doesn’t entirely abandon the hope that their name suggests, however cynically. The album ends with Rowden moaning, “Impermanence is to be as one against the world,” and there’s a darkly motivational message in those nine words. Death is inevitable, and so too might be the event that clears out the surface of the planet, if only to make room for another distant civilization. But there is life on earth, thriving despite the odds. And whatever horrors Hope Drone foresee, there’s also a strange beauty in that horror, of things beyond our control, of destruction within our grasp, and our ability to exist in spite of it all.