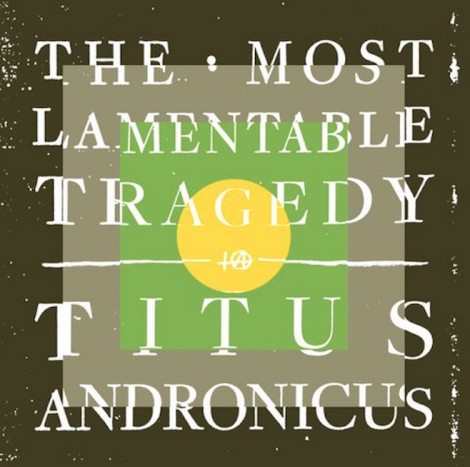 It takes a certain rare breed of artist to successfully cover Daniel Johnston. With the exception of the few tracks chosen for re-imagining on The Late Great Daniel Johnston, most of the singer/songwriter’s work is harsh and somewhat disturbing, albeit in a oddly charming way. The song in question here is “I Had Lost My Mind” from 1982’s Don’t Be Scared, and the artist repurposing it is New Jersey punk group Titus Andronicus. Though, in practice, Titus’ rugged, beefed up version is hardly a stand-alone tribute. In fact, there are other songs on their fourth LP, The Most Lamentable Tragedy, that sound more like hat-tips to Johnston’s signature sound, (closer “Stable Boy” being the most obvious). But in the case of this cover (called “I Lost My Mind” here), the original is swallowed up and spit out as a well-placed turning point in the band’s 29-song punk opera.

That cover isn’t even the first song on the record called “I Lost My Mind.” The first track by that name, a Titus original, details the mental history of the story’s protagonist, ‘Our Hero,’ a character nestled neatly in between the real-life experience of Titus frontman Patrick Stickles and a fictional character who goes on a fantastic, VALIS-esque journey. To give you an idea of where our narrator starts off, his first words to us are: “Some days start with an earthquake/ The bed shakes until it breaks/ And I hate to be awake/ Most days start with a dull ache/ Enough weight to crush my face/ And I hate to be awake.” So he’s not a person in the most ideal of mental or social circumstances, to say the least.

The opera’s narrative itself can be interpreted in a number of ways but, on a whole, follows Our Hero’s journey through anger, depression, mania, hallucination and, perhaps, reflections into his past lives—depending on how you read between the lines. Regardless of how you interpret the specifics, Stickles does a masterful job of portraying the narrator’s mental relationship with himself as these various states of mind are processed. The most obvious example of this is “Lookalike,” in which our depressed, reclusive Hero encounters another version of himself, with which he then swaps places. (“Who is this I see trying on my face?/ I went to bed one night and he took my place.”) From that point on, at least for a good chunk of the story, the narrator takes a complete 180 on his life perspective, speaking in overpositive hyperbole and proclaiming to only like things when they are “dimed out” or, in other words, dialed up to the extreme. With a good chunk of narrative spread over these 93 minutes, and a great deal of it laid out in Stickles’ most dense bark, there’s a lot for the listener to digest here.

It’s fortunate, then, that in addition to being Titus’ most ambitious story to date, The Most Lamentable Tragedy is also their best sounding album. Split between rambling rockers, complex sound experiments and fantastical bursts of energetic song, the music that accompanies this long and winding story suffers just as much from identity crisis as its narrator. But rather than fuck with the listener’s ability to concentrate, the constant switching of pace and mood actually serves to calm the listener in a cathartic way. This is a very raw and—at times—emotionally difficult record, and Titus’ ability to expertly insert a Springsteen-style jam or a full-on hardcore breakdown provides familiarity in a lyrical landscape that could easily become alienating or trigger-provoking.

In both narrative and sonic execution, The Most Lamentable Tragedy relies heavily on peaks and valleys. It also depends completely on the listener’s willingness to take a ride with Stickles & Co. The record sounds brilliant and there are a small handful of rockers that could stand out on their own as punk anthems. But for the most part, spinning this LP means jumping in for the long haul. Thankfully, Titus Andronicus have had a decade to master the chops necessary to attempt a feat this daring. And damn if they don’t pull it off well.