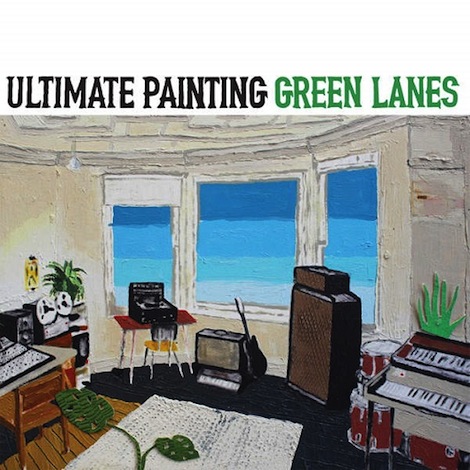 It’s been a good half-decade for guitars. Not flashy, squealing, shredding-into-oblivion guitars (although, come to think of it, those are doing just fine too), but laid-back, distortion-free six-string strum. Kurt Vile, Real Estate, Mac DeMarco and the ever-expanding Woodsist family, just to name a few, have contributed greatly to a landscape of gorgeously jangling, crisply chiming major and minor chords. It’s kind of nice, actually—refreshing, even—to hear guitars presented as cleanly and as simply as possible, touched up by just a trace of reverb and little else. That’s exactly the mirthfully minimal approach that Ultimate Painting takes on their sophomore album, Green Lanes, and even at its most straightforward, nothing ever feels oversimplified or unfinished. It’s just the right amount of restraint.

Ultimate Painting’s core members, Jack Cooper (Mazes) and James Hoare (Veronica Falls), are both guitar guys, and the recorded product centers around their serene but spindly riffs. A track like “The Ocean” has a rhythm section, but it’s utilitarian—the two guitarists are nimbly riffing around each other with such gently wonderful flair, it would be an absolute shame to sully that with any unnecessary rhythmic extras. Not that Cooper and Hoare entirely avoid adding a little extra touch to their arrangements, whether it’s the “In My Life” piano plinks in “Break the Chain,” or the lovely vocal harmonies of standout track “Paying the Price.” But throughout it all, the focus remains on the guitars—those stunning, spectacular guitars.

Cooper and Hoare keep it loose most of the time, frequently teetering between the perfectly imperfect anthems of Pavement and the zen-boogie of the Velvet Underground. And those two reference points hit a critical mass on the album’s best song, “(I’ve Got the) Sanctioned Blues,” a freewheeling guitar-pop strut about the hassles of commute delays: “You’ve really made me late, you know… You really fucked me.” It’s catharsis-lite, frustration turned into mellow fun rather than a full-on exorcising of one’s demons, and that’s kind of what makes this all so fun. Ultimate Painting make everyday pop for everyday people—they just do it a lot better than everyone else.